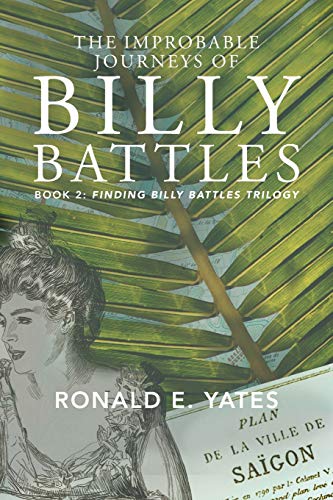 about this book: The Improbable Journeys of Billy Battles is the award-winning second book in the exciting and adventure-filled Finding Billy Battles trilogy. It begins in 1894 after Billy has suffered the tragic loss of his wife. He is aboard the S.S. China, an ocean-going steamer headed for French Indochina where he hopes to find an old friend as well as some solace in his disastrous and heartrending life.

On the way he meets Katharina von Schreiber, a recently widowed and mysterious German baroness. The two form an unlikely bond that leads them both from one perilous escapade to another. Eventually, Billy is inadvertently embroiled in the revolt against the French in Indochina. In so doing he is perhaps the first American to become entangled in a country that will eventually be known as Vietnam. Later, he finds himself in the Philippines during the Spanish-American War and the ferocious Filipino-American war that followed.

The Improbable Journeys of Billy Battles, like Book 1 (Finding Billy Battles), incorporates decidedly accurate historical fact with fiction. Both books are meticulously researched down to the last detail so readers not only find themselves immersed in a compelling story, but are exposed to historical events and real people that make the worlds of the late 19th and early 20th centuries come alive.

Before writing the Finding Billy Battles trilogy, I spent some 27 years as a foreign correspondent for the Chicago Tribune. During that time I lived and worked in Asia and Latin America, including most of the places in which my books are set. Therefore, descriptions of cities such as Saigon, Manila, Hong Kong, etc. are based on my personal experiences and observations. Also, during that time, I covered several wars, revolutions, and popular uprisings which greatly aided in the descriptions of conflict that arise occasionally in the trilogy.

My purpose in writing the trilogy (I am currently working on Book #3 and plan to have it available in early summer 2017) was to tell a compelling story that, while fiction, is grounded in historical fact. As such, I was careful to use the vernacular of the time and to describe places and events as they were in the late 19th and early 20th centuries. There is no great literary message in the books, other than to demonstrate that many people in the past lived remarkable lives filled with adventure, sadness, struggle, joy, and love just as today. They were not, as so often portrayed in the black and white photographs of the time, stiff, lifeless figures without vivacity and depth. It was a time when the notions of "honor," "fidelity," and "duty" were guiding principles in most people's lives.

The Finding Billy Battles trilogy is targeted at readers who enjoy accurate historical fiction topped off with a generous helping of action and adventure. It takes readers to an earlier time devoid of the relentless intrusion of cell phones, the swiftness of air travel, the soulless anonymity of The Internet that is inexorably extinguishing person to person interaction, the insipidness of today's fast food culture, and an overindulged, self-centered society that craves and demands instant gratification.

Despite the dearth of the modern conveniences we take for granted today, people who lived during Billy's prime were not dominated by and yoked to technology the way too many of us are today. They were less harried and stressed and more disposed to stop and smell the flowers than their 21st century counterparts.

If there is one message my books have it is this: Reading a book is a lot like life; you live it one page at a time.