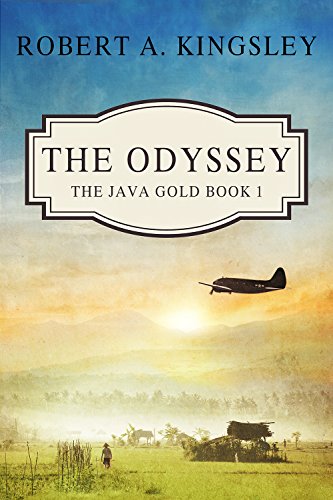 Book: The Odyssey (The Java Gold Book 1) by Robert A. Kingsley

about this book: "The Odyssey" is the first volume of the "Java Gold" series. This multi-part historical fiction story will take the reader all over the world and through half a century of recent history. I have combined my life-long interest in aviation and military history (especially World War 2) with local, on-site knowledge, gathered during my travels all over the world as an internationally active ICT consultant.

The first volume of "The Java Gold" begins in the former Dutch East Indies. The Japanese invasion, the post-war struggle for independence and the general unrest in South East Asia serve as a fascinating background to the story.

With the Japanese on Java's doorstep, a left behind cargo of pure gold is discovered. A damaged airliner is hurriedly repaired, a scratch crew is put together and the plane an cargo are sent off. But a malignant fate intervenes and the flight ends abruptly when the airliner breaks down.

The crew is attacked by armed insurrectionists and the survivors barely escape, after hiding the gold. When they reach safety they learn they are posted AWOL and wanted for theft of the gold. Separated from their wives and loved ones, they are forced to hide from the authorities but they somehow survive, despie flying the most dangerous air route on earth.

When the war is over, the hidden gold starts to cast its spell over the surviving crewmembers and they try to recover it. But the bad luck still haunts them and they encounter violence, misfortune and death while they try to retrieve the hidden treasure.

The idea for the book was born during a "steak and beer" dinner in a California micro-brewery. I had just come across a number of highly intriguing facts and events that had happened in Indonesia during and after the 2nd world war.

'I could write a thriller around them' I said and one of my closest friends dared me to do so. And so I did.

I originally intended to write a short "action" novel based upon the loss of a planeload of pure gold. But the story took over; love, tragedy and political complications somehow managed to sneak in and now I am busily working on Book Three of a multipart series...