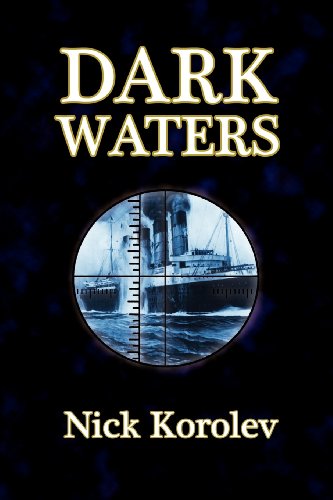 about this book: People have always had a fascination with stories of famous shipwrecks, especially those steeped in controversy. DARK WATERS is the suspenseful maritime historical novel of the sinking of the Lusitania, the most magnificent and fastest liner of her time that held a deadly secret. She had been built with Admiralty money to be easily converted to an armed naval cruiser and was being used to smuggle arms and ammunition to England her passengers unknowingly in the role of human shields with her captain in denial of the operation.

The story is told from the viewpoints of Captain William Turner, her master, Junior Third Officer Albert Bestic, and passengers millionaire Alfred Vanderbilt, theater impresario Charles Frohman and the fictional characters German-American Kate Sterner, a New York dress designer who is taking the voyage to England with her English fiancé Thomas Colburn a wealthy industrialist with June wedding plans. On the other side of the controversy are Kapitan Leutnant Walther Schwieger of U-20 who sank her and Unteroffiziere Gunter Lott the head torpedo mechanic on U-20 with family problems back home. All are swept into the 9/11 of their time in a fateful encounter on the high seas which left twelve hundred men, women, and children dead in a historical incident that rivals the other great liner disaster, the Titanic, in scope. It is also a tale of a more genteel world forcibly being introduced to the concept of total war by desperate combatants where the submarine was an experimental but frightening new weapon of stealth being used in large numbers for the first time in history. The history and the events that propel this story are true.