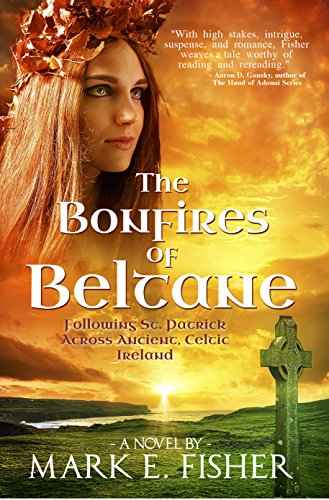 Book: The Bonfires of Beltane by Mark E. Fisher

about this book: This book is about Taran, a young man on an island off the coast of ancient, Celtic Ireland in AD 432. Trained to be a druid, he's heard about the one true God they worship in distant Britain. Once a year his clan's druids sacrifice a child to the dread sun god, Crom Cruach. Now, at the ceremony where Taran is to be inducted into his clan's inner circle, against the advice of Laurna, his betrothed, and his father, he questions whether Crom Cruach is even a god. Is he, instead, a demon?

The druids and clan leaders are aghast. They banish him to the sea in a small boat. Taran survives a storm, lands in the country called Ériu, where he travels across the bogs. He finds Patrick, the Roman evangelist whose life mission is to bring the gospel to a pagan land. Ancient Ireland is a proud land mired in the druids' spiritual darkness, where kings defend their traditions to the death. Soon, Taran's fate is forever coupled with Patrick's. Yet even as he helps spread the gospel, Taran longs to return to his island people and his beloved Laurna.

First and foremost, this book is an adventure story. Yet, after reading it, you will discover a period of history many know little about. Only four hundred years after Christ's resurrection, how did Christianity spread across the ancient world? What kind of dangers and trials did evangelists like St. Patrick face? How did the people of ancient Ireland live?

Back then, Ireland was the island at the end of the world, beyond which there was nothing. It was a country of savages who ran into battle naked, painted blue, and screaming. It was the home of pirates who stole Romans from their villas in the dead of the night for the slave trade. Yet, within a few years, Ireland would save Western civilization itself as the European continent descended into the Dark Ages. The key to this astounding turn of events was largely due to the efforts of Patrick and his followers in bringing Christianity to its people.

I've been asked how I came up with the title, THE BONFIRES OF BELTANE. On the night of the pagan celebration of Beltane, when the spirits of the Otherworld came closest to this world, every clan and hillfort would light a bonfire. But the druids claimed that in all the land of Ériu, the king of Tara must light his fire first on the Hill of Tara. An ancient druid taboo prescribed that if ever another bonfire was lit before the king's, anywhere in the land, then the kingdom of Tara would fall. When Patrick arrived at Tara, he encountered stiff resistance from the king's druids. So in celebration of Easter, he decided to light his fire first on the nearby Hill of Slane, in opposition to the pagan druids' fire. What happened next? You'll have to read the book to find out.