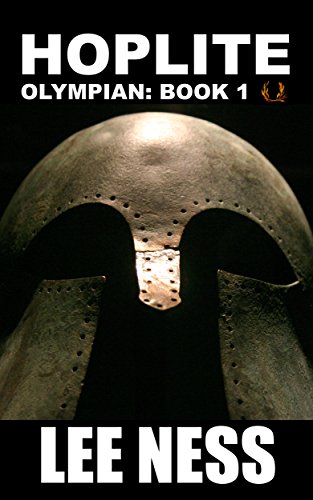 about this book: It all started with a conversation during a tea break at work. A few of us read a lot of books and we all have like historical fiction. The conversation was around which periods had not really been covered by the big hitters, like Scarrow, Cornwell and Iggulden. We couldn't really think of any. It was an interesting conversation, but didn't amount to anything. At the time I was writing a non-fiction book called The Sports Motivation Master Plan.

A year or so later, the Master Plan was off with the editor and I was at a loose end. I was still maintaining the same routine, up at 5am sat in front of the computer, but doing nothing productive. On the way to a competition with a mini-bus full of athletes, a 5 hour round trip on the motorway of mind-numbing frustration in a bus that was restricted to 56mph, I started to think about writing a novel, but what about?

There I was, with a bus full of athletes…….

The idea of writing a contemporary novel about the Olympics came to mind, but it didn't even interest me, never mind a reader, but then, there it was. Ancient Olympics. I thought back to that conversation and tried to think of a major series of books set in Ancient Greece, and I couldn't. A great film in 300, but not a major book series that any of us knew about. Brilliant. I was sure there was, but the fact that none sprung to mind was good enough. By the time the bus journey finished I had the plot, not just for one book, but for a whole series. I read an excellent book called The Naked Olympics, by Tony Perrottet which gave me some great ideas and helped me decide the exact period I wanted to set it in. The aim wasn't to write about specific historical events, only to use them as a backdrop. The aim was for the characters and the plot to carry the day.

During my research though, I found such a rich vein of content that if I'd simply picked Ancient Greece and dropped a pin in the timeline, I could have content to write a book on wherever it landed. For example, I use a real character in my book called Pericles, the Polemarchos of Athens and his activities are on the fringe of the story. He comes into the story properly towards the end. But, if you read Pericles' Wikipedia page, you could write a whole series of novels just from that! However, my protagonist, Alexander is a young man in a bad situation. There is a rule of thumb that it takes 10,000 hours of practice to become world class at a sport (I cover this in my Sports book) and in this day and age, athletes go through a certain progression to get to the top of their sport. Alexander doesn't have that opportunity, so he will learn all he needs to through the situations he finds himself. It won;t be an obvious path, but when someone reads the full series (and if they understand sports development) they will be able to see everything that led to his achievements.

The title, Hoplite, is the name for the Greek warriors of the time, derived from their Hoplon shields. I designed the cover myself. I wanted to try and capture the level of intimidation that I wanted Alexander to feel during his time on Samos.

When I came to the end of Act 2 in the book, I wasn't sure how to transition to Act 3. I knew the whole plot of Act 3, and I had got to a point where I wasn't quite happy with how to get there. I got stuck for a month or so and went back to the research. I started with the setting. The story is set on the Island of Samos during the Siege in 440BC. I had a look at background on Samos and there it was. In the 6th century BC, a 1036m tunnel was excavated from both ends under Mount Kastro by a Greek Engineer called Eupalinos. The incredible accuracy was a feat for the first tunnel in known history to be dug using geometry and the second to be dug from both ends. The tunnel supplied the capital city with water and was of defensive importance in a siege as it was hidden. There it was, so the story continued…..

I finished the novel at the end of 2013, but as it was my first, I knew it wasn't ready. It's been edited innumerable times, the first 10 chapters have been removed and I've now rewritten it. I am a better writer now, more skilled and it is ready. I released it on e-book in parts originally, with the full book and paperback released at the end of November 2014.

I've now dropped the price (including a free promotion up to 12 June 2016) because the sequel is now due, on 30 June - Cadet: Olympian Book 2. This one sees my protagonist, Alexander, meet up with some sworn enemies at a military academy and faces a battle of survival when all the odds are stacked against him. This will hopefully be followed by the third book set at an Olympic Academy and the fourth set at the Olympics over the next 12 months. This is all to tie in with the 2016 Olympics of course.

The book was written for adults and certainly I don't shy away from the brutality of the time and of war, but it's been suggested to me that because of the age of the protagonist, it will also appeal to the 'New Adult' genre of late teens onwards. To be honest, I don't mind who it appeals to as long as people enjoy reading it as much as I enjoyed writing it.