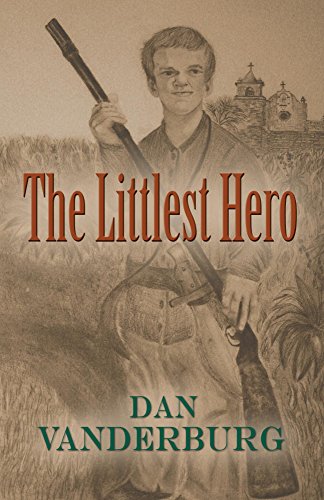 about this book: The story of the massacre at Goliad always fascinated Dan. Few people outside Texas history enthusiasts know much about that horrible event in Texas history where more than twice as many men were killed as were at the Alamo. In contrast, everyone knows the battle of the Alamo story because of all the greater-than-life-sized heroes shown in movies, on TV, and written about in scores of books.

Dan wanted to tell the story of Goliad and other lesser known battles of Texas' war with Mexico for independence from the perspective of a very unique character. He chose a young, athletic, adventurous dwarf as the protagonist, and gave him a unique athletic background that justified his heroic actions. There are many athletic young men who are short-statured and they are the inspiration for this character.

When Dan first decided to develop a dwarf as his primary character in "The Littlest Hero," he knew no dwarfs. That's not surprising as dwarfism occurs in about one to every 15,000 to 40,000 births. Dan did his research and found that there are about 200 different kinds of dwarfism with some contributing to physical disability, but many little people enjoy a normal, active life free of crippling disability. He met many dwarfs through the Little People of America including the model for the book's cover, Brian Kauf, a high school wrestler. Many young little people engage in team sports like soccer, flag football and basketball and Dan watched some lively games in his preparation for writing "The Littlest Hero."

In "The Littlest Hero" Stub's name was a gift of love from the several young women craving love in their life and giving this new addition to their home all the love they had. He carried his name with pride and preferred it over his given name of George Washington Lebeaux. So Stub Lebeaux was born.

The Littlest Hero follows Stub as he joins The New Orleans Greys, a real fighting unit, from Louisiana through the Texas War for Independence. It is the uplifting story of a young man -- a little man in physical stature, but with a big heart -- who wants to earn respect and discover his destiny. Stub Lebeaux, a young dwarf, leaves his home and somewhat unconventional adoptive family, and soon learns what life, loyalty, courage under fire and the misery of war is all about.

Follow the adventures of this exceptional young man as he earns respect and finds his destiny in frontier Texas during the revolutionary war for independence. Meet Stub LeBeaux, a man of small stature who was big enough to rub shoulders with the giants of Texas history.