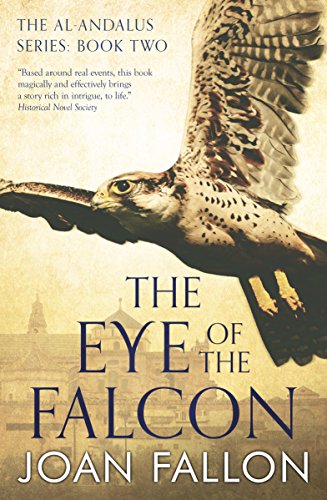 Book: THE EYE OF THE FALCON - Book 2 in the al-Andalus series by Joan Fallon

about this book: This is the story of Subh, a slave girl who rises to become the most powerful woman in al-Andalus by marrying the caliph, al-Hakim, and giving him two sons. When the caliph dies and leaves his eleven-year-old son as his heir, his widow seeks to protect him and his throne by setting up a regency to rule until he comes of age. However her love for one of the regents blinds her to his ruthless ambition. Gradually her lover isolates her son from his court and his country, imprisoning him in his palace and moving the seat of power to Córdoba. Subh has to choose between protecting her son and staying with her lover.

Based on true events, The Eye of the Falcon is set in Moorish Spain in the 10th century and is the second book in the al-Andalus series. The first book, The Shining City, takes place forty years earlier.

The title of the book came from the fact that falcons were an important status symbol and showed a sign of wealth and power. They were brought as expensive gifts to the caliph by foreign ambassadors.

Much of the research for this book had already been covered when I did the research for The Shining City, but I had to find out all I could about my main characters, who actually existed - the regent, Subh, the caliph and his son and a few other government officials.