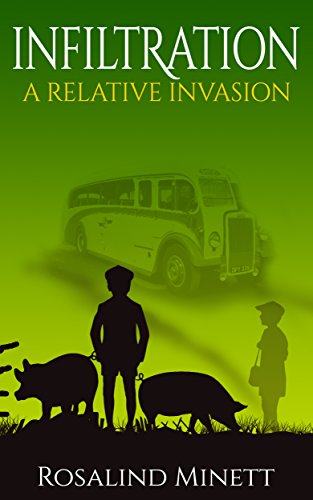 about this book: "A splendid sequel to Intrusion."

1940, the Blitz in London forces Billy's family into evacuation again. If you wondered what happened as Billy was taken on the horse and cart to his new billet, Infiltration takes the story on.

Mother and Jill go back to the vicarage where there were before, and this time Kenneth and Aunty are billeted in a nearby house. Billy is sent back to his last village, but to a different home, one that his father has determined is "not a hovel." Billy settles happily with his kind, elderly foster parents but has to suffer the taunts of Kenneth who is more part of the family and acting brother to little Jill, than Billy is, living some miles away. Mr Durban has sent a photograph of the precious Cossack sabre so Billy uses this image to continue his imaginary power.

Then a family tragedy results in a much greater threat from Kenneth, one that will affect both boys' lives permanently.

The boys remain evacuated for the rest of the war. They both develop their separate talents, Kenneth's Art impressing everyone. Billy has his moment of heroism, proving that his practical skills are not to be ignored. However, he is much more valued by his foster carers.

The war is not kind to Billy's favourite Uncle Ted, his mother's brother. Billy worries all the time about what is happening to him in whatever country he may be serving. Just as the war nears its end, the wonderful news comes that Uncle Ted has been sent home, albeit to hospital to recover. Billy has to come to terms with a changed man at the same time as tearing himself away from his attachments to return to Wandsworth after VE Day. The photograph of the sabre has been stolen, its support gone. There is only one person who could be responsible, and that person is going to be at very close quarters on the return to London.