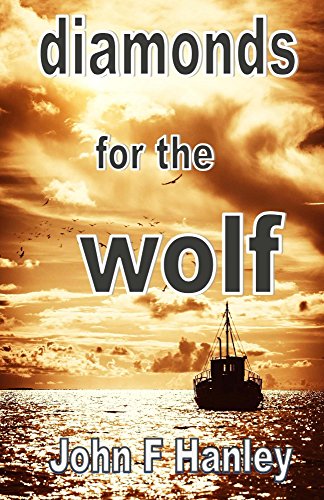 about this book: DIAMONDS FOR THE WOLF is the third novel in the Jack Renouf series and starts where THE LAST BOAT left off in October 1940. Having escaped from German Occupied Jersey, Jack has been training with the newly established Commandos. His best friend, Saul Marcks, is now working for Lieutenant-Command Ian Fleming in the Naval Intelligence Division based at the Admiralty Building in London. Fleming, who later went on to write the James Bond series, has come up with another of his crazy plans. This one is called 'Operation Ruthless' and involves ditching a captured German bomber in the English Channel as a sprat to catch the mackerel of an E-boat. Alan Turing, who is trying to break the Enigma Code, has persuaded Fleming to mount this operation to try to secure the latest German code words to help him. A group of German speaking English airmen has been recruited but due to an accident, Jack and Saul find themselves on board with other commandos as the bomber hurtles to the waves below.

I'd stayed away from Jack's tempestuous world for over a year but just had to find out what he was up to. I'd left him travelling with Saul in a taxi to a function at the Soviet Embassy in Kensington so jumped aboard to see where that would lead. As usual he managed to surprise me and I soon found myself having to carry out detailed research on embassy buildings, Soviet diplomatic procedures and dialectical Marxism! Needless to say, he tested my knowledge even further and I discovered secrets about the area very close to my home in Cornwall about which I'd been completely ignorant.

Later I had to locate and pour over 1940s maps of France, Spain and Portugal as well as learn everything I could about Boeing 314 Clipper flying boats!

One of the reasons I resurrected Jack was in response to queries from readers of the previous two novels about when I was going to feed them some more. Apart from the research, the story flowed into my word processor very easily — probably because the principal characters are so well established in my mind that I now see them as real people and encourage them to surprise me with their actions.

Diamonds For The Wolf is the third in a planned ten-book series about Jack and his adventures before, during and immediately after the Second World War. The final instalment is already written, but I have to keep updating it as these independent characters I've created take me down paths I hadn't anticipated and create time fractures in the last book.

For the first two novels, I used a full-service publisher and was subjected to the complete experience and frustration inherent in shared control. This time I've published using Amazon's Createspace for the paperback which transferred seamlessly to Kindle. Using that experience of copy-editing and proof-reading, I was able to submit a manuscript with very few errors which were simple to correct during the on-line process. As the brand was already established I found cover design relatively simple and once I'd secured the rights to the background photos I used MS Publisher to complete the process. It took three attempts to get it to fit the Createspace templates. The biggest problem was formatting the text and for that I had to wrestle MS Word into submission.

I hope you enjoy this latest episode!