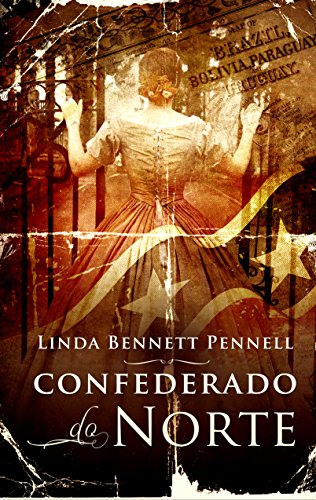 about this book: Character Interview with Mary Catherine of Confederado

LBP: Would you introduce yourself and tell us where you were born?

MC: My name is Mary Catherine MacDonald Dias Oliveira Atwell and I was born January 1, 1857 in Washington County, Georgia on a farm overlooking the Oconee River.

LBP: We know that you left Georgia in 1866 because your father didn't want to live under Reconstruction. You must have been quite small when the Civil War began. Do you have any memories of life before the war?

MC: It's sometimes difficult to recall that there was ever a time before the war or that anything existed prior to our world's being reduced to ashes. That period for me is really only impressions and shadows because they are my very earliest memories, those of a child of less than five years.

LBP: Would you mind sharing what you do remember?

MC: I suspect my memories are, as is the custom with very young children's recollections, somewhat mixed up and jumbled together. Nevertheless, I will do my best to explain how it once was and then how it became.

During my earliest years I was happy and I had no fear of the future, for young children are blessedly unaware that terrible things can happen in their small, secure worlds. My parents and I lived in a comfortable home and enjoyed the company of neighbors and family within its safe walls. We were kin, in one way or another, to most of the people in the county and Papa was catered to by all of our female relatives, especially his old maid sisters, for you see, ours was a supremely patriarchal society.

LBP: You have mentioned your home. What do you remember of it?

MC: When I picture "home", I see an unpainted dogtrot farmhouse that wouldn't have been terribly grand by most people's lights. It exists now only in shadowy visions: cotton fields stretching from the edge of a deep porch down to the river, flashes of a sunbeam dancing on the lemon oiled surface of Mama's best table, tall windows and high ceilings. It's all really rather vague, but I do have a clear memory of Mama's garden. It is of her favorite rose bush to which I did some considerable damage one spring by picking off all the buds before they even broke color and for which I was spanked rather severely.

LBP: As a Southern farmer, did your father own slaves?

MC: It should be understood that my home was a farm rather than a large plantation. Nonetheless, it did include a few colored slaves, most of whom worked in the fields. Of their faces, it is only Bess's that has stayed with me into old age. My Bess, who lived in the house, and who took care of me, and whom I loved as much as I did my parents. As was the custom, I was reared more by Bess than by Mama and Papa. It was simply the way of things.

LBP: I see. What do you remember of your parents?

MC: My clearest memories of my parents are that Papa spent his days with the field hands and that Mama loved music. She was an accomplished pianist. Beautiful music filled the house when she played her pianoforte in the parlor. Sometimes when Bess brought me in to say goodnight, Papa would be sitting beside Mama, kissing her neck as she played and she would be smiling at him in the special way that she reserved only for him. I think they must have been very happy. They laughed a lot in those days. Then, the war came.

LBP: Forgive me for asking what may be a painful question, but what do you remember of the war?

MC: Yes, it is still painful after all this time, but I will try to answer as best I can. This was how time was marked with our people: before the war and then after.

Most of my memories from the war are those of a young child and are thankfully not all that clear. It may also be that I have deliberately locked them away in my mind's deepest recesses. It was a dreadful time. I do remember Mama crying a lot and staring at the small tintype of Papa in his uniform. She read and reread his treasured, but infrequent letters. I know that I often cried myself to sleep at night because I missed my adored papa so much. Toward the end we were hungry all the time because there simply wasn't anything left to eat. Mama became so thin that Bess fumed and declared that someone would be made to pay for visiting all this trouble upon us, but how this was to be accomplished was unclear since we were just females left to fend for ourselves.

The extent of our defenselessness was resoundingly brought home to us in late November 1864. Although my war memories may be sketchy in some ways, frightening clarity surrounds the arrival of Sherman's soldiers on their relentless March to the Sea. Even now their shouts and snarling faces haunt my dreams. Some nights I'm disturbed with nightmares of choking on the acrid smoke from our burning home, trying not to reveal our position with coughing, and of the milk cow's terrified bawling as she was consumed in the barn's inferno. Mama, Bess, and I hid in the woods down by the river while those men stole everything that wasn't nailed down and set fire to what they couldn't carry off.

LBP: It must have been a very difficult time. With your home burned, where did you find shelter?

MC: After the ashes cooled, Bess found a few pieces of tin and repaired the damaged roof over the kitchen, the only building not completely destroyed. We stayed there and made do as best we could. Bess begged Mama to move into town where Papa's spinster sisters had a small house, but Mama insisted that we couldn't leave the farm because Papa would expect to find us there.

LBP: What was it like after the war ended, before you all left Georgia?

MC: Some six or seven months after Sherman's March, the war ended and Papa came home. It was the summer of 1865 and I was just a child, but even then I knew that life as we had known it was over forever.

This is where the fabric of my life increases in its complexity. The texture becomes richer and the pattern becomes more intricate. In unraveling the threads, perhaps they can be rewoven into a firmer, more solid whole – one without the holes and ragged edges that marred it. After all, this was my purpose in writing Confederado do Norte.

At first, I wasn't sure that it was my papa who had returned to us. It wasn't just the difference between my five-year-old memories of him and the perceptions of a more grown up girl of eight. He'd become someone I simply couldn't recognize. His uniform, in which he had once taken such pride, was tattered and filthy. His skin seemed to fold loosely over his tall frame and his eyes were so sunken that his once handsome face had taken on the appearance of a death mask. But the thing that frightened me most was that he didn't speak to us, not even when Mama cried and begged him to tell her how she could help. By day, he spent most of his time alone simply walking the fields that had once been so productive. He wept at night when I suppose he thought no one could hear him, but why he thought he couldn't be heard is beyond me, for all of us slept in the same cramped space. And sometimes he cried out in his sleep as though he was still off fighting.

There came a time when he drifted into a phase of almost complete inertia, and for a while, we feared for his sanity. He refused to be roused from his bed despite all of our efforts. He would just stare at Mama and get a strange look in his eyes when she pleaded with him. I wasn't supposed to know that Mama and Bess thought he might completely lose his mind, but it didn't take medical training or age to see the vacant stares and hear him in the night.

Gradually, to everyone's relief, he got a grip on himself, which was worse in many ways because of the rage that replaced the vacant expression in his eyes. I remember avoiding my father, whom I had always adored, but around whom I became cautious. His mercurial nature was confusing and frightening, not unlike the political environment in which we found ourselves living.

LBP: Can you describe that environment?

MC: The Confederacy had lost the war and wherever her people gathered, they discussed the only topic on anyone's mind – the horrors of armed occupation. A former enemy in charge of the local and state governments was simply something that no one had ever conceived possible.

LBP: What do you think ultimately persuaded your father to desert Georgia?

MC: During times of turmoil, some people cling to anything familiar because it provides a feeling of normalcy, however tenuous. Others seek a different path. Papa and my mother's eldest brother Nathan, the only men left alive on either side of our family, decided that there was only one response to the unendurable. Like a small number of people from across the region, they ignored the pleas of our former leaders like General Robert E. Lee, and turned their eyes south. Toward a very distant south.

LBP: And how did you feel about this?

MC: I didn't care who was in charge of the government or how ruined everything was. Georgia was home. It was where my family came from as far back as the American Revolution. But most important, it was where my beloved Bess was. I never got over being separated from the woman who had been the rock in my life since birth. I loved my parents, but they were wrong both before and after the war. Ultimately, the South's defeat was the best thing that could have happened for all concerned.

LBP: Thank you for sharing your thoughts with us. We wish you well and hope that writing has provided the solace you sought.