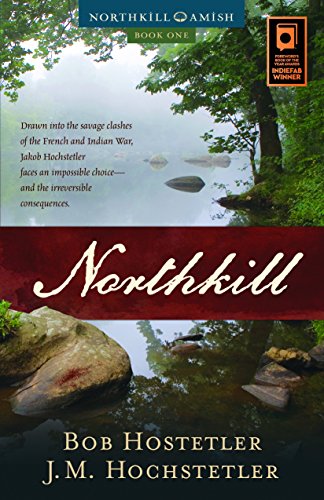 about this book: Northkill just won a Foreword Reviews' 2014 INDIEFAB Book of the Year Award in the Historical (Adult Fiction) category.

It is closely based on the inspiring true story (well-known among the Amish and Mennonites) of the authors' family history. It has been documented in many publications and in contemporary accounts preserved in the Pennsylvania State Archives and in private collections.

In 1738 Jakob Hochstetler and his family immigrated to North America, seeking sanctuary from religious persecution in Europe and the freedom to live and worship according to their nonresistant Anabaptist beliefs. They built a home near Northkill Creek, at the base of the Blue Mountains, on the frontier between settler and native territory.

For eighteen years, they lived at peace with their neighbors, including the native tribes who occasionally appeared at and around their home. But early on the morning of September 20, 1757, as the French and Indian War raged, the Hochstetlers' way of life was brutally shattered. Their home was attacked by a war party of Delaware and Shawnee allied with the French. Facing almost certain death with his wife and children, Jakob made a gut-wrenching decision that would change their lives forever.

This meticulously researched page-turner has been a labor of love for its authors, who are descended from the immigrant, Jakob, and two of his sons.

Other books by Bob Hostetler (more)