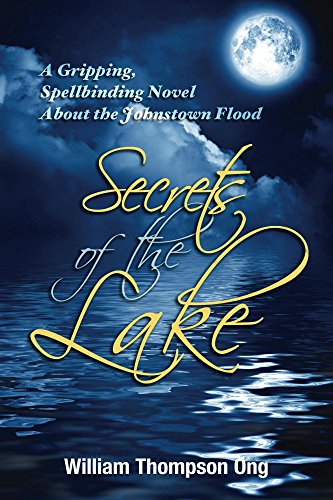 Book: Secrets of the Lake by William Thompson Ong

about this book: What inspired me to write SECRETS OF THE LAKE happened about 15 years ago while watching a PBS documentary on the Johnstown (PA) Flood of 1889. The banking, railroad and steel moguls who controlled the nation's wealth refused to spend the pennies required to repair the dam holding back the waters of their private resort on Lake Conemagh. I found my blood boiling over the intolerance and selfishness of the Pittsburgh aristocracy—and being a writer felt I had to take action, do something, express my feelings.

I gave myself an assignment. I would write a novel exposing the whole business. It would have a focus similar to GONE WITH THE WIND in exposing the burning of Atlanta during the Civil War. But it would be wrapped in a 'Princess and Pauper' romance featuring an immigrant Irish schoolteacher and the determined daughter of a steel baron.

Caleb McBride and Annabelle Prescott would let nothing stand in their way of learning the truth and taking action. They would confront the bigotry and hypocrisy of the wealthy who stood on the pillars of entitlement. They would defy kidnappers and hate-mongers and throw their bodies and their minds into protecting the innocent while breaking down the barriers to their own sexual independence. I dramatized the heartbreak of the flood in full, but I devised an ending that would do justice to fighters and crusaders everywhere.

I couldn't believe the reviews that have come pouring in. "A beautiful love story by a master story-teller: 5 stars!" was pretty typical. But what also pleased me was being able to cast a light on the politics of the day and, for those who are interested, to allow some comparisons with what is going on in Washington today. Read it—and maybe you'll decide to take some action of your own.