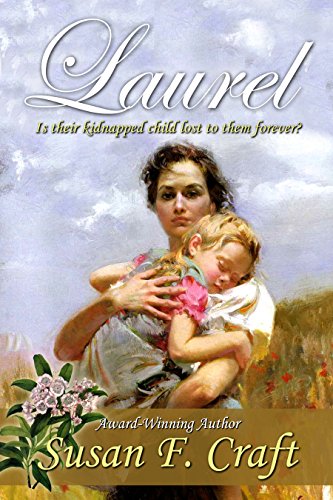 Book: Laurel - Will the couple's love sustain them or is their daughter lost to them forever? by Susan F. Craft

about this book: Desperate to rescue their kidnapped daughter, Lilyan and Nicholas Xanthakos trek two hundred miles through South Carolina mountains and backcountry wilderness, fighting outlaws, hunger, sleeplessness, and despair. When the trail grows cold, the couple battles guilt and personal shame; Lilyan for letting Laurel out of her sight, and Nicholas for failing to keep his family safe.

They track Laurel to the port of Charleston as post-Revolutionary War passions reach fever pitch. There, Lilyan, a former patriot spy, is charged for the murder of a British officer. She is thrown into the Exchange Building dungeon and chained alongside prostitutes, thieves, and murderers. Separated from her husband, she digs deep inside to re-ignite the courage and faith that helped her survive the war. Determined to free his wife at any cost, Nicholas finds himself forced back into a life of violence he thought he'd left behind.

I wrote Laurel because people who read its prequel, The Chamomile, loved the couple and their adventures during the Revolutionary War so much they begged me to continue their story. I wrote both books as well as Cassia, the third in the trilogy, as "stand-alones," which means you can reach each book without having read the others.

Even in the midst of one of the worst adversities possible, the kidnapping of their child, Lilyan and Nicholas not only cling to each other, they call upon the Lord for calm hearts and wisdom. Those prayers are answered during their darkest hours of discouragement preventing them from succumbing to despair. Throughout their travails, people come alongside them just at the right moments speaking words of encouragement, helping them in their search, and providing for their needs.

Here's a review from a reader in Lima, Peru:

This book is magnificent. When I read the synopsis, I thought this would be such a dramatic story that I'd be probably crying and sobbing the entire book… Well, I was totally wrong. While this book is really deep and provokes strong feelings because there are a lot of dramatic scenes, also it has a lot –I mean, a lot- of mystery and suspense.

I could never guess how crazy the story would became and totally loved it. The characters feel very real and the dynamic between them was perfect. Also, the story caught me completely and I could not stay away from the suspense of every page.

I was delighted with the author's narrative. Her words took me right to 1783 and I felt part of the story, which I think is an important quality in historical fiction. Also, the message was powerful and it leads to reflection.