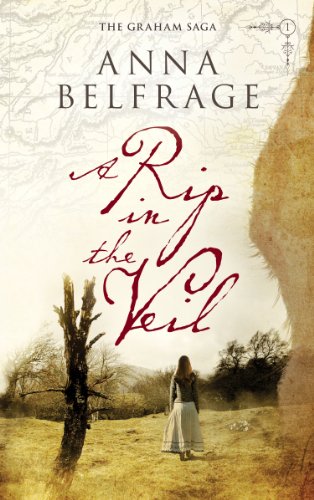 Book: A Rip in the Veil (The Graham Saga Book 1) by Anna Belfrage

about this book: If you'd asked Alex Lind what she thought about time travel BEFORE that fateful August day in 2002, she would have laughed you in the face. Of course, after having been hurled three hundred years back in time, Alex isn't laughing anymore. At all. In fact, she's scared silly, even more so when she realises there is no way back, leaving her stuck in the 17th century.

Fortunately, Alex is no retiring violet. Forced to come to terms with a new life, in a new time, she does her best to adapt – helped along by Matthew Graham, the tall Scotsman who found her, concussed and singed, on the moor.

Matthew is a man with burdens of his own, chief amongst them his treacherous brother and false ex-wife. Plus he is a fugitive, having recently escaped from prison. To suddenly find himself with a strange, female companion – a woman who indecently displays her curves to the world in tight-fitting breeches – fills him with conflicting feelings. On the one hand, he is more than attracted to this apparition with dark blue eyes and a cloud of short, dark curls. On the other, he is wary of women, his ex-wife's betrayal still too raw.

Alex is as attracted to him as he is to her – no matter that the man is ridiculously old-fashioned at times. But his beautiful hazel eyes, the way he smiles at her, they warm a little spot inside of her that has lain frozen since her dreadful experiences some years back. With him, she can share truths she's never told a soul before. With him, she can truly be herself.

Not that life in 17th century Scotland will ever be a romantic walk in the park: Alex Lind's new life may be lacking in such modern comforts as showers and electricity, but instead it is packed to the rim with adventure and action – far too much action at times.