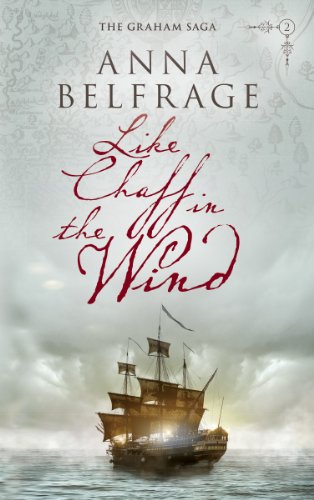 Book: Like Chaff in the Wind (The Graham Saga Book 2) by Anna Belfrage

about this book: Alex and Matthew are back! When time traveller Alex's husband Matthew is brutally abducted in Edinburgh, Alex knows immediately who has done it – and why. This is the handiwork of Matthew's brother Luke, since some years nose-less after a far too close encounter with an enraged Matthew and a knife. What she doesn't know at first is where her Matthew has ended up, but with the help of her brother-in-law she quickly understands Matthew has been carried over the seas to Virginia, there to be sold as indentured labour. A death sentence, more or less…

Matthew Graham learns first-hand what it is like to live like a slave, to be treated as a disposable asset that can be worked to death, subjected to casual cruelty. He also learns the hard way just how thin the veneer of civilisation really is – the more he is brutalised, the less of a man he becomes. Truly, if it hadn't been for Kate, Matthew might have died, but Matthew prefers not to think overmuch about Kate, or her honey-coloured hair. After all, he has a wife, and deep down he is convinced Alex will come for him, save him from this hell.

Travelling in the 17th century is really, really uncomfortable. Alex spends interminable weeks at sea, and with every day she feels Matthew's will to live weakening. In her dreams she sees him – in his dreams he sees her. Time has become Alex's enemy, and when the elements conspire against her as well, she is close to despair.

Yet another book of adventure, love and action, Like Chaff in the Wind is the story of a man who is lost, and the woman who risks everything to find him.