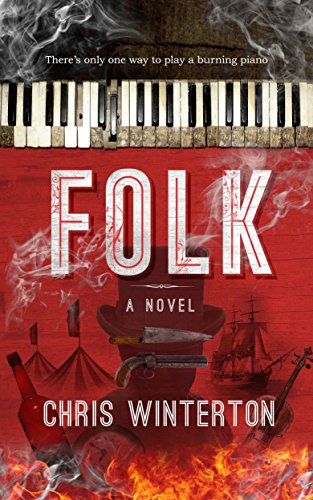 about this book: Chris likes hats, which is good because for his novel Folk, he had to wear quite a few. He's made a career out of being a polycreative; he's a writer, designer, art director, musician, producer, creative director and new dad. Chris is one of many in a growing breed who's as comfortable swapping the fedora for the straw boater as he his swapping the keyboard for the keyboard.

He's done just that with his debut novel, weaving the central themes around his own experience as a performer, writer and musician to create a carnivalesque imagining of Melbourne circa 1912. Folk is the literary/historical fiction ballad of how a foreign troupe of carnival misfits seduce a remote city by the sea. Milton, a young master-tailor and gifted musician, is thrust into a world of provocative music and a nefarious underground culture of escapism where the lines between the righteous and the corrupt are obscured by sand and sawdust.

"I've often heard is said that you should focus on one thing and do it extremely well. I just don't have the attention span for that kind of monk-like dedication and I'm not so sure it's as relevant anymore. Being polycreative means I can draw on my knowledge from one skill-set to inform and enrich another."

Author Chris Winterton quit his life, moved to the remote Japanese Alps and found himself writing about home. 'I quit my job as an Art Director, left my band and moved out of my house to follow a girl to a tiny village in the Hyogo Prefecture - it wasn't even on google maps. I took a laptop and bunch of instruments and waited for the snow to extinguish the flaming leaves of the autumn maples and snow us in. At first it was a song set in St Kilda where my grandfather used to play Piano in a jazz band. But the characters couldn't be contained so it became a sort of historical fiction musical. The more it snowed outside the bigger my world became inside and Folk grew into a novel.'

Chris went on to marry that girl he chased to Japan and he's currently working on an illustrated children's book and accompanying song for their son Monty.