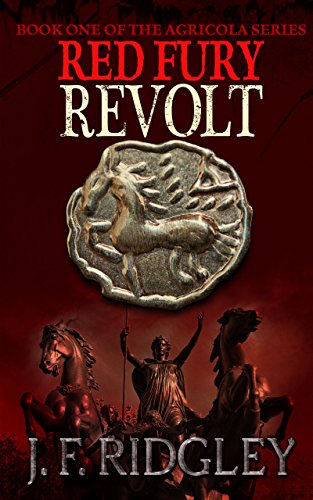 about this book: Boudicca, Boudica, Boudiga, Boudicea, well this is one woman and she was the reason for Red Fury Revolt. She is the Iceni queen who led 250,000 warriors to rid Britannia of Rome's control. Back then, eighteen years ago, I got it all wrong...the legion that is. But the story never changed. An insulted queen flogged and her daughters raped and nearly destroyed for standing up to Rome's tax collector, Rumor or history has it that the girls were raped. But what if one of them was not. What if...

Well I'm getting ahead of myself...During my research I also discovered a very handsome young Roman who was present during this Revolt. Gnaeus Julius Agricola. He was there when Boudica revolted. He was the consul's/governor's second or Tribune laticlavius. And, during Agricola's lifetime returned to Britannia many times as legate/commander and as consul/governor four times.

Why? Why would Julius Agricola continue to return to Rome's least favorite province? Could it be he was searching for something or someone. I think so. And could he have fallen in love with one of Boudica's daughters and she him. And it wasn't rape?

In Red Fury Revolt, book one of my Agricola series of Julius's career in Britannia, both Boudica and Julius revolt against Rome's control over their lives. The questions is, is Rome powerful enough to win both battles?