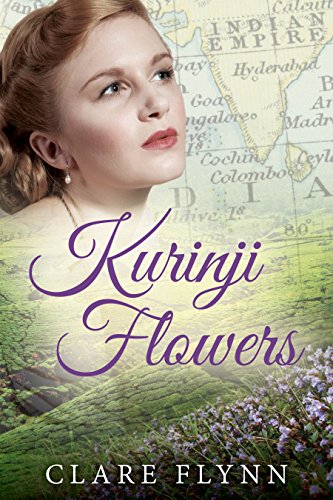 about this book: The idea for Kurinji Flowers came to me during a sleepless night in a hotel in South India. I started thinking about the people who may have stayed in the hotel when it first opened in the 1930s. I was haunted by these imaginary characters and while the story changed in many respects as I started to write it, the essence of those people and their lives stayed with me.

Ginny is only 18 and a reluctant debutante in London when the story begins. Under the Svengali-like spell of an abusive friend of the family, she is caught up in a scandal that means she must leave London and her court presentation - and with it her prospects of making a "good marriage".

But Ginny gets another chance when she meets Tony Tilman and before long is sailing off to a new life on a tea plantation in India. Marriage presents her with new problems and she struggles to come to terms with her new life in the claustrophobic atmosphere of the British expatriate community and her ambivalence towards India and its people.

Kurinji Flowers is about love and loss and self-discovery. Ginny's story takes place against the background of India during World War 2 and the struggle for India's independence.

To research the book I spent time living in a 1930s built bungalow in the middle of a tea plantation, walking the countryside that Ginny would have walked and painting the same scenery (though not as well as she did!).

The title Kurinji Flowers comes from a plant that flowers only once in every 12 years. The only place on the planet where it grows is an area of South India in the Nigiri Hills. Its next flowering will be in 2018.

• "This was my rainy weekend, curled up in bed with a hot cup of coffee kind of book - one I didn't want to put down till it was finished. She writes about India, her people and their customs and talks about the land in such a descriptive manner that you want to go there and witness it yourself."

Video: How I write