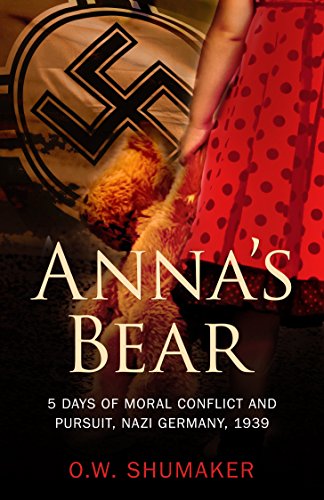 about this book: I have been interested in World War II since I was a child and went to our attic and discovered some World War II memorabilia that had belonged to my uncle. It fascinated me, especially his helmet which which I would wear around fight imaginary battles. As I grew I built a zillion models of world war planes and ships. And then,later, when I had the chance, I would pick up a book about the war and read it. In my early twenties I discovered Shirer's Rise and Fall of the Third Reich. I was fascinated and shocked. And hooked. I've been studying Nazi Germany ever since.

My work on this book began about five years ago as I tried my best to find out some of the more unusual and strange things that the Nazi's did. My collection of those facts let me, in part, to write Anna's Bear.

Anna's bear is a story built around some of the stranger facets of Nazi Germany - the Hitler Youth, League of German Girls, the Lebensborn system, and others.

But I worked long and hard on the story itself too. I continued to fascinated all the way through the process. I hope you'll find Anna's Bear to be as interesting to read as it was for me to write. And I hope to follow up with more expositions of the 20th century phenomenon, Nazi Germany.