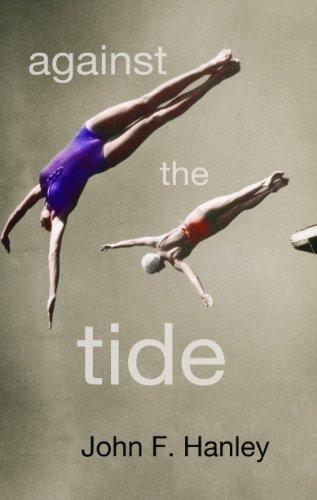 Book Review: Against the Tide by John F. Hanley

about this book: I was born and grew up on the island of Jersey which lies over 100 miles from England and a mere ten from France. Despite this, it has been British for over 800 years and well-fortified to defend against French invasion.

On Friday June 28th 1940 the Nazis attacked the island without warning and threatened to continue shelling and bombing until it surrendered. It had already been demilitarised and had no manned defences so a massive white cross was painted in the Royal Square outside the parliament building and its nearly 40.000 inhabitants succumbed to five long years of German occupation.

My mother was one of those though she was fortunate to escape with her life as on the evening the Luftwaffe bombed and strafed the harbour area she was feeling too unwell to take her usual evening stroll there with her mother. A married couple who lived across the road used to accompany them each evening. They continued without my mother and grandmother but only one of them returned. Fifty-five years later I was randomly allocated a lady to collect and drive to our school's Christmas dinner. We'd never met before but she told me her story. It was her husband who been killed that evening — shredded by a German bomb.

That meeting was the trigger for me to write this series as I wanted to discover what it must have been like to be my mother's age on the eve of war and examine how life might have panned out for me in a world of chaos and destruction.

Against The Tide is the result. It's written in the first person and the main character is Jack Renouf (my mother's maiden name). It's not a piece of historical fiction even though I have spent years researching it and the other books in the series. Rather it is a coming of age adventure set against the background of war. It is probably the only novel to start in the middle of a water polo match as I chose to write about what I knew and set it in the location where I had spent all my adolescent summers. Not much had changed there between1939 and 1965 when I had to make my decision about leaving the island – not to avoid 'living with the enemy' but to start a career in teaching which lasted for nearly forty years. How different it would have been if I'd been eighteen in 1939 but I'm not Jack — he is far more daring and interesting. He's also a much better swimmer and more practical though I doubt he could type as quickly!

This is the first book in a series of ten and each one takes place during a short period in sequential years of the 2nd World War. I know it only lasted six years but he gets involved in post war events including Israel's battle for survival as his best friend, Saul, is Jewish. The second book, The Last Boat, which covers the days leading up to the German bombing in 1940, is ready for publication.

I've kept Jack and his close friends, Saul, Caroline and Rachel alive – they were all ninety-two this year and they have some startling tales to tell.

But let my readers speak. Here are a few lines from two Amazon reviewers who summarise far more effectively than I can:

"From the very first words written - this book had me gripped … I love the development of the characters - particularly for our protagonist who gets caught in a love triangle with two fantastically strong yet beguiling young women (I'm rooting for Rachel! !)... this book has got it all - love, passion, history, spies, smuggling, conspiracies, all told amidst the backdrop of the beautiful island of Jersey"

"This book is a rich soufflé of young love, war, sport, greed and friendship; on the outside it's a thriller with races, boat-chases, shootings, spies, and a roller-coaster-ride ending but on the inside it's a touching coming-of-age story that has resonated with me days after finishing… Made me remember what it was like to be young in the summer and made me want to buy a motorcycle. What an ending! Can't say enough good things."

The moment you open the book you are hooked. The story is fast paced from the start, with Jack's immediate struggle in the pool demanding the reader's attention and empathy. From then on the book develops into a complex and interweaved plot with many intriguing and exciting sub plots. There is depth, but also fast paced action, which John Hanley has combined well.

The looming Second World War provides a background tension throughout the novel and the secrets and personality of some characters makes the book difficult to put down. Jack's struggle with relationship and family issues make fascinating reading, and the development of all the characters is very believable and absorbing. The competition between Caroline and Rachel for Jack's attention is particularly entertaining as is his relationship with Rudolph, his swimming opponent. Family and other relationships are volatile, often violent and provide many interesting twists and turns, adding to the tension of the main plot.

Many aspects of life at that time are so well illustrated that parts of the book remind me of my own father and his experiences (as told to me later). I love the way the pace increases slowly but surely building up to an excellent and surprising ending. I thoroughly enjoyed this book and look forward to reading more of John's work. [by Arthur Crandon]