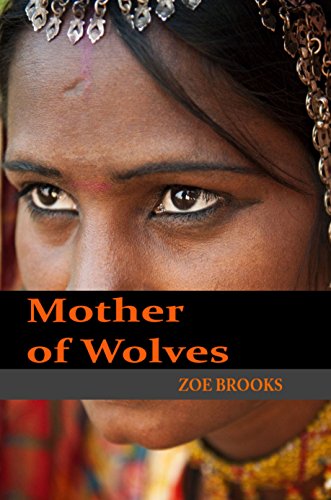 about this book: • "In the morning Lupa knelt at her husband's grave. 'Toro, I swear you will be revenged. All that have had a hand in your death will pay for it. I will pursue them as a wolf does. I will tear them down. And I swear also that I will bring our boys to manhood, as a shewolf guards her cubs.'"

Lupa, the book's central character, starts out with the sole aim of avenging her husband's death and defending their sons, but during the course of that revenge she finds first that revenge is not simple and secondly that her people have come to look to her as a leader. Her campaign has become a wider campaign and the choices she makes have major consequences for both her and her people.

Mother of Wolves was inspired by the long history of the persecution of the gypsies in mainland Europe and by a crude folk painting in a Czech castle in particular. The painting depicted a woman whose ear had been cut off and behind her a hanged man. This made me wonder: what if the gypsies had had a leader who could have united them to fight? And what if that leader was a woman? I have always been fascinated by those women leaders in history, who despite all the prejudice against our sex, rise to the top.

As for the inspiration of the book's title: at its simplest Lupa adopts two wolf-cubs whose mother has been killed by hunters. But of course the wolves are symbolic as well. In the book Lupa's people believe that each person has a spirit animal and Lupa's is of course the she-wolf.

The book is a historical fantasy. It is set in an unnamed country at an unspecified time. But the countryside described in the book is based on the riverscape of the River Severn in England and so I did a lot of research into the history and customs of the area and the natural history of the river. Of course I researched the history and culture of the gypsies in depth, but I also included elements of other travelling cultures, most notably the travelling native peoples of North America.