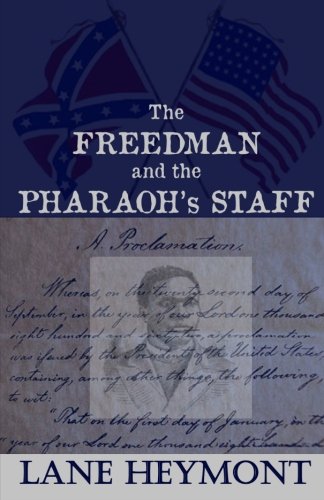 Book: The Freedman and the Pharaoh's Staff by Lane Heymont

about this book: THE FREEDMAN AND THE PHARAOH'S STAFF is set in 1871, six years since the Civil War ended and Reconstruction has begun. The Ku Klux Klan has been outlawed with the Force Acts of 1870 and 1871 and the Federal Government has actively hunted them. The last of the Klansmen gather in Louisiana, under the leadership of the last Grand Dragon, Verdiss.

Jebidiah Johnson is a war-torn soldier who fought for the Union. Bitter and angry over the current state of America, Jeb is racked with guilt for the young men he lost in the war.

Crispus, Jeb's brother-in-law, is an idealistic activist. He believes with the war's end and Reconstruction underway there can be peace between the races. He takes action, and steals a map from the Ku Klux Klan.

Jeb rescues Crispus from the Klan and must keep him hidden, while protecting his wife and child as the Klan razes their hometown. The two brothers-in-law set out to stop Verdiss and his followers from using the Pharaoh's Staff. Soon, Jeb and Crispus learn Verdiss is working for an even more insidious force. When Verdiss claims the Pharaoh's Staff, it's up to Jeb and Crispus to capture the magical artifact and destroy it before Verdiss uses it for his own dark purposes.