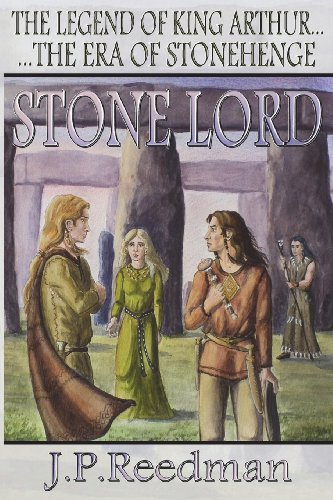 Book Review: Stone Lord - The Legend Of King Arthur, The Era Of Stonehenge by J.P. Reedman

about this book: STONE LORD is a novel that takes the characters in the legends of King Arthur back to their earliest roots--in the British bronze age, the era of Stonehenge. Set around 1900 BC, in the time of the Wessex culture, it is a story of a bronze age youth,Ardhu, who, guided by the shaman known as the Merlin, high priest of Stonehenge, rises to kingship and becomes a famed warrior, fighting off invaders from Britain's shores.

I was inspired the write STONE LORD by my interest in megalithic monuments, especially Stonehenge, which is almost in my back yard! I have a lifelong interest in archaeology and anthropology, and have utilised my knowledge of this period in STONE lord. Most of the places in the book are real...and i have personally been involved with the excavation of some of them!

The main readership of my book would be anyone who loves prehistoric fiction, historicals and historical fantasy and different takes on the Arthurian mythos. Archaeology and anthropology buffs would probably enjoy it too.

STONE LORD took about a year to write, but expanding into a larger project than I once though--that's why there will be a second part sometimes late next year...MOON LORD.

The cover was drawn to my specifications by the Irish artist Frances Quinn. The characters depicted are wearing actual items found in the local burial mounds around Stonehenge.

Excellent story telling had me gripped from the first. Love the references to all the folklore and legends, some which I knew and some I had not heard before. Janet brings that era to life, I can imagine that it would have been exactly like that, her wonderful descriptions have given me inspiration for my artwork. I am awaiting the next instalment. [by Michelle Topps]