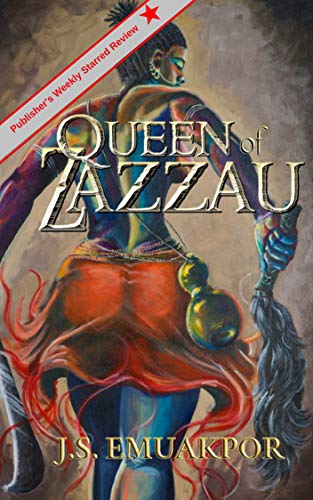 about this book: "Queen of Zazzau" takes place in 16th century West Africa. The story opens with Amina's first look at the ravages of war. With foreign invasion imminent, she must defend her people, but doing so could signal a disastrous cascade of prophesied events.

It took five years for me to spin this tale with bold prose and vivid imagery, and another five to perfect it. Months of research went into shaping the characters. Of particular note is the pantheon of Hausa (W. Africa) gods, who now exist only in the periphery of Hausa culture.

Reading this book is an immersive experience. In writing this novel, I made every attempt at accuracy. The descriptions of the dwellings, the clothing, the food, and culture are as close to real as possible. And while it is unlikely that gods came down from on high to physically interact with mortals, I do not believe in 'impossible.' I endeavored to weave all of the known historical facts (both disputed and accepted)into a story in which gods walk the Earth, albeit infrequently.

This novel, told in the crisp voice of real-life precolonial Queen Amina herself, is a refreshing change from the male-hero dominated world of science fiction and fantasy. It is a character-driven tale with a remarkable female protagonist and some strong female secondary characters. It passes the Bechtel test. With its brazenly Afrocentric theme, it certainly addresses the lack of cultural diversity in speculative fiction. So far, this novel has appealed to a wide array of adult readers in the genres of literary fiction and speculative fiction, and has garnered some good reviews, including this one from Ragdoll Reads, UK.

If you would like to escape the familiar, then dive into the pages of this book.