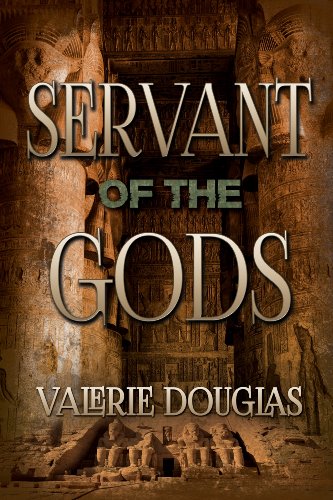 Book: Servant of the Gods by Valerie Douglas

about this book: Servant of the Gods is ancient Egypt as you've never seen it before - historical fantasy with the emphasis on both the history and the fantasy. It's the story of Irisi - a one-time mercenary and slave who rises to become High Priestess - and General Khai, both of whom will be called to defend Egypt from an ancient evil.

If you love ancient Egypt and the Egyptian Gods as much as I do, you'll love this book.

Servant of the Gods and its sequel were written because I wanted to write a much more accurate depiction of the Egyptian Gods and Goddesses. Anubis was never a bad guy, he guided those who had passed on their journey to the afterlife.

Servant of the Gods and its sequel were also so much fun to write. Researching them was almost as much fun because I learned more about old Gods than I thought I knew, and why the Egyptians used chariots. The bad guys you're used to seeing weren't bad at all, but the bad guys are definitely badder than you'd expect.

At the end of a Servant of the Gods, a choice is made that will surprise everyone.

Other books by Valerie Douglas