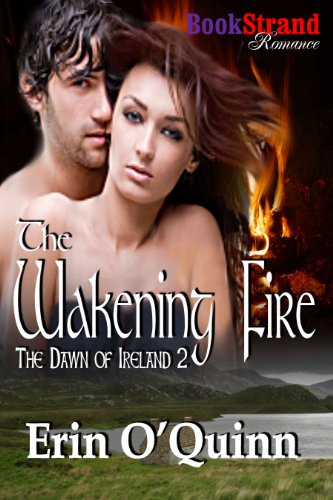 Book: The Wakening Fire (The Dawn of Ireland 2) by Erin O'Quinn

about this book: [log line] A fire wakens in all of them--lovers and enemies alike--and not just from St. Patrick's ritual flames.

THE WAKENING FIRE follows STORM MAKER both chronologically and in terms of the over-arching plot. At the end of the first book of the series, the beautful Warrior Caylith weds sensuous Liam. In this book, their adventures begin--not in the outside world, but in their marriage bed, covered with wild animal pelts, where each of them begins to learn the deepest secrets of the other's passion.

But the outside world comes to their door and wrenches them from the pleasures of a honeymoon. Caylith's old nemesis Owen Sweeney looms large again. Although a cripple in a makeshift wheelchair, Sweeney is a frightening, brooding man whose dark past presents a mystery to ever curious Caylith.

The search for Sweeney's startling secret brings all the characters together at last on the sacred Hill of Tara. There, St. Patrick and the High King of Ireland light rival fires, fighting for the hearts and souls of the pagan people of Ireland. Based on a probable historic event, the climactic fires lit by the saint and the king are just part of the conflagration...For both Sweeney and Caylith carry secrets that will change the history of Ireland itself, sweeping the entire land into a new future.