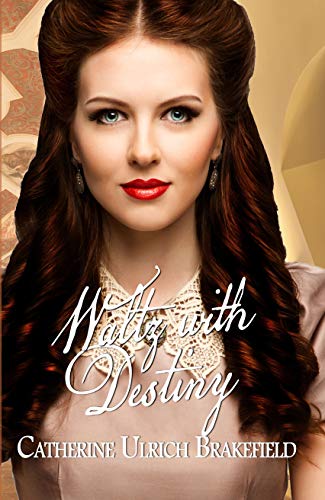 about this book: Harry S. Truman once said: “There is nothing new in the world except the history you do not know.”

That saying is so true! After years of research and interviews, came Waltz with Destiny. A journey I took to inform and encourage my readers as I write America's story one truth at a time!

Waltz with Destiny is inspired by notes, the scraps of pictures, pieces of prayers, and worn-out pocket Bibles carried by our infantrymen. Specifically, the 34th Red Bull Infantry Division, 135th E Rifle Company who were stationed in Italy.

Waltz with Destiny is the fourth and final book of the Destiny saga. The story unfolds in Detroit during the summer of 1941 as Hitler wages war with Europe. Esther McConnell Meir worries she will not have the grit to carry on the McConnell legacy. During a dance, she meets the confident, Eric Erhardt.
The title of the book was inspired by how Esther and Eric met during that Big Band Era.

What a change from my third book, Destiny of Heart! Eric Erhardt peddled papers and sold apples on street corners. Esther Meir milked cows and harvested crops during The Great Depression Era.

Esther and Eric find themselves immersed in the splendors of the eloquent ballroom, The Vanity. The haunting music of Glenn Miller, captivates them. However, that carefree world was not to last!

Through the lives of Esther Meir and Eric Erhardt, we get a first-hand experience of what it felt like to be fun-loving young adults looking to fulfill their American dream. Then suddenly find themselves plunged into a war not of their choosing.

Guys like Eric Erhardt remember. “The outside world all thought Americans were too soft, and not much more than playboys, and we wouldn’t be able to fight—man, did we show them!”

Here is what people are saying about Waltz with Destiny:

History Worth Remembering and Characters That Bring it to Life

Catherine Ulrich Brakefield’s Waltz with Destiny is the crown jewel of the Destiny series!
Brakefield brings 1940s Detroit to life, along with the WWII battlefields of Italy.

Insight into the "Greatest Generation"

In this 4th book of the Destiny series Cathy gives real insight into WWII and the circumstances that made the "Greatest Generation" the strong, God fearing Christians they were. Displaying how their determination and "In God We Trust" attitude made the USA the nation all others have come to rely on.