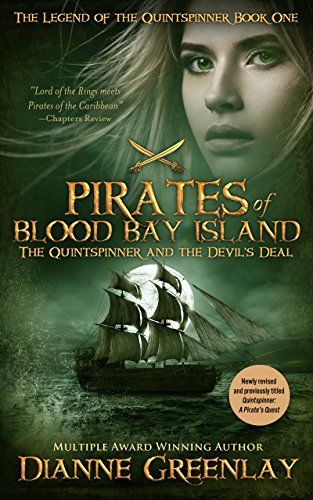 about this book: Even in the year 1717, one month, one week, or one day, can make all the difference in the world.

One month and a day ago, Tess Willoughby was the daughter of a well-to-do physician in London.

One month ago, she witnessed the murder of an old seer and came into possession of the dead woman's odd ring – an ancient Spinner ring, known by the locals as the Ring of Prophesy.

One month less a day ago, she was wrongly accused by her father of having stolen the ring.

Three weeks ago, by her father's arrangement for the family, she became an unwilling passenger on a merchant ship bound for the pirate-infested waters of the Caribbean.

Two weeks ago, at her father's insistence, she became forcibly betrothed to a man who she recognized as being the seer's murderer – a violent and politically powerful man who covets her only for her ring.

One week ago, she met a sailor and experienced the thrill of being in love for the first time.

Two days ago, she realized that such a secret love would endanger them both, and, heart-broken, she was forced to choose her loyalty.

Yesterday, her fiancé betrayed her during a pirate attack and those she loved were slaughtered.

Today, she is plotting to save her own life and perhaps to take his in retribution. The ring is urging her to decide quickly...

Tomorrow will be too late.

QUINTSPINNER – A PIRATE'S QUEST is a cross-over novel that has entertained both YA and adult audiences alike. Meticulously researched, yet not your typical historical fiction, it presents the blood and the mud of life in the 1700's and has won numerous Book Awards in YA, Historical, and Commercial categories.

It has been described by reviewers as

• "an amazing tale that has it all - murder, mystery, suspense, action, fantasy, and a bit of magic thrown in." — Ann's Book Nook

• "Lord of the Rings meets Pirates of the Caribbean." — Chapters reviewer