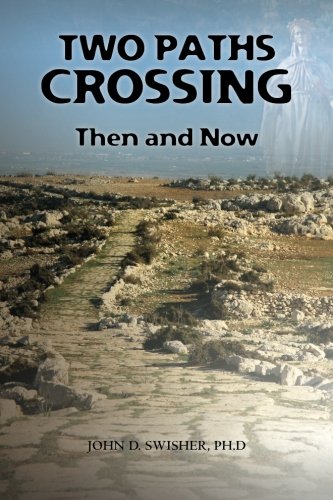 Book: Two Paths Crossing - Then and Now by John Swisher

about this book: The idea for this book germinated during the author's time in Greece focusing on ancient sites including Delphi. Swisher began to wonder what happened to all the documented treasures that had been delivered to the Priests and Oracles at the Delphi sanctuary and this story evolved from there.

We follow both Atys, a Lydian slave from 560 BC and James, an insurance agent in AD 2010, on their journeys to Delphi, Greece. Atys is among the slaves carrying a heavy chest of solid gold coins up the steep trail to the Oracle. Their paths cross when James finds a mysterious metal box in the crumbling basement of an old Greek farmhouse he may inherit. James makes a friend and partner in Angela who struggles to overcome her fears to help him unravel a mysterious message written in ancient Greek. You will find ordinary people with normal quirks and believable skills who will take you on a fast-paced adventure leading to an exciting ending.

The amazing thing about Delphi is that there were oracles in residence for over one thousand years. One had to be purified to go before the oracle in a nearby spring and no one doubted the ability of the oracle to talk with Apollo about the future. In general, the priests must have done better with predicting the future than today's doomsday Sayers or my stock market advisor for that matter.