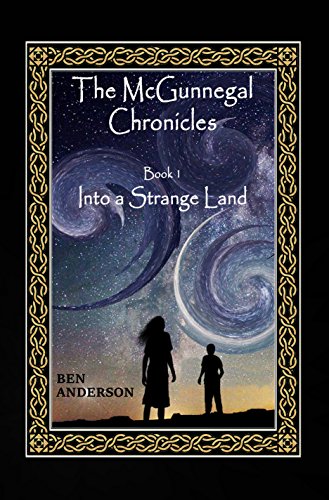 Book: Into a Strange Land (The McGunnegal Chronicles) by Ben Anderson

about this book: The McGunnegal Chronicles books were born out of a long series of bedtime stories that I told my children when they were young. My family enjoyed these stories so much that they urged me to write them down, and at long last I've begun to do so.

These tales of good clean adventure, action, fantasy, and mystery seek to provide a marvelously fun story to fall into, but also have a bit of historical fiction thrown in, giving the reader a few things to think about as well.

The setting for the stories begins in 1846 - a year after the Great Hunger struck Ireland. By 1852, about a million people were dead, having either starved to death or died of disease, while the ruling government at the time largely sat by and watched. How do we deal with a world of suffering? What ought our response to it be?

The McGunnegals not only face this personally, from the inside, but when they discover a portal to another world in their crazy grandfather's potato cellar, they must deal with it from the outside as well, as newcomers to a strange land that is oppressed by dark creatures and has fallen under the spell of a terrible witch that drives its inhabitants mad or puts them into an eternal sleep.

Being an Orthodox Christian, I've also tried to explore a few of the mysteries of the inner person and spirituality as well. I can't help but to at least put my feet in that vast ocean and let its waves wash against me, hearing its call to wade out a little deeper and swim. Deep calls to deep.

Hope you enjoy and are enriched by The McGunnegal Chronicles.