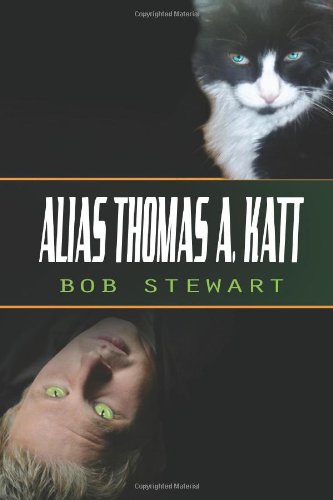 This is a stanger in a strange land tale written in "feline noir" from the first person POV of the cat. Along the way he learns he can't "dog paddle" when he lands in the Mississippi River, uses all his cat cunning when he comes face to face with a snake, and uses up two of hiss nine lives. Being able to connect with his mistress on a human level is his fondest dream.

The genesis of the book: My wife found a snake in our South Texas home, so she insisted we get a natural-born snake fighter: A cat. We went to the animal shelter and Schyler, then a mere weeks old, pranced out of the cage and into her heart. Me? I became the hired help, charged with the tasks of keeping the potty box clean, serving up food and water. Apparently royalty doesn' hobnob with the hired help. One night as we watched the film noir classic, The Maltese Falcon, I wondered if Schyler would be as tough as Bogart, should they change bodies. Thus the idea of Alias Thomas A. Katt, which is a combination thriller, cozy, mystery with dollops of romance and a bit of humor.

The cover features our housepet, Schyler. The book was a National Novel Writing Month (NAO) in which you write a book in thirty days; it did take another year to whip it into shape.

Alias Thomas A. Katt is the perfect summer read. Take it to the beach the pool or the shade tree in the back yard. The quirky, offbeat mystery novel will pull you in and delight you. Enjoy. [by John D]