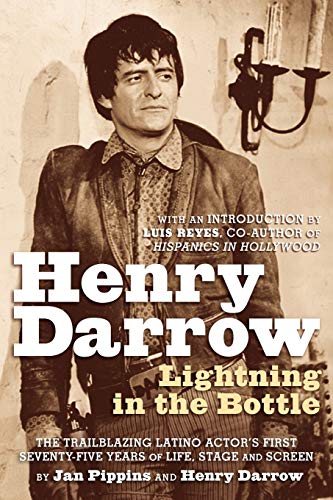 about this book: We all need heroes and from 1967 to 1971, TV audiences loved the heroic rascal "Manolito Montoya" on the classic Western THE HIGH CHAPARRAL. Actor Henry Darrow's portrayal of Manolito rushed him headlong to international stardom. Rather than bask in the limelight, Darrow (born Enrique Delgado) used his fame to open doors for other Latinos. A true Hollywood pioneer, he carved out an acting career spanning over fifty years. "Henry Darrow: Lightning in the Bottle" is the story of a flawed, funny and often courageous real-life hero. Infused with strong socio-historical elements, the book chronicles more than one man's improbable life and takes the reader on a journey through America and Hollywood from the Great Depression to the present.

In the 1960s, I was one of the millions of girls smitten with Manolito. Over the years, I enjoyed seeing Henry Darrow in many roles, but I was a lousy fan. I never cared about getting his autograph and wasn't interested in meeting him. What's the big deal about meeting an actor? You make introductions, shake hands and move on. It's not like you're going to be buddies. On the other hand, meeting him and finding out he was a jerk would have been a very big deal. Like discovering that your high school crush is mean to his mama, it would have tainted nice memories.

Was I ever surprised when Henry and I met unexpectedly several years ago. We talked for hours. He's a fascinating guy and we became friends, but I was stunned when he later asked me to write his biography. Happily for me, Henry never throws anything away so he was a biographer's dream subject. Happily for Henry's wife Lauren, we cleaned out their garage and two closets while sifting through his massive memorabilia collection.

While writing "Henry Darrow: Lightning in the Bottle" I was acutely aware that I had a significant responsibility. This kind and charming man, his wonderful wife, friends and family entrusted me with their stories. I owed my best work to everyone involved, including eventual readers. After three years of interviews, archival research, writing and rewriting, we had a book with no title. Thank God for director and film professor Francisco Menendez who said he called Henry "'lightning in the bottle', because he would show up ready to go. With the students, I reshot sequences until I got the performance I wanted. Henry? Take one, he's there with guns blazing."

"Henry Darrow: Lightning in the Bottle" is winning applause from readers and reviewers who enjoy biographies, Hollywood history, acting as a profession, Latino history, classic westerns and just a ripping good read. If you aren't a fan of Henry's now, read the book and you will be.

• This book has been voted the 2012 Book of the Year by Wild West News.