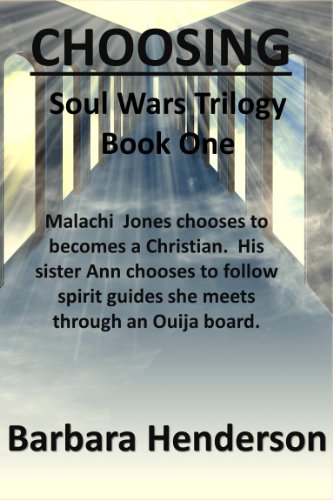 about this book: Like many families we know, Ann and Mal (Malachi) Jones were raised in a family with the outward appearance of respectability, but they have no religious training at all. Their father Frederick doesn't believe in anything except money and getting his own way. Their mother Shelly firmly believes that if you are good enough you will go to heaven. She sees no need for the Christian teaching of redemption for anyone she knows, much less herself and her family.

While Mal is attending college he meets a Christian woman named Belle. Belle introduces Mal to the Bible, and specifically Bible prophecy. Mal studies for himself and chooses to become a believer.

His sister Ann takes a different path. She discovers the occult through an Ouija board. She quickly progresses beyond the board to direct contact with two familiar spirits or spirit guides named Cabiri and Zisa.

The book is really a familiar story to many people in that so often part of a family follows Christ and the other part rejects Him entirely. Conflict is sure to follow as war for the souls of the lost is fought.

Guardian angels are there to help Mal and Belle. Angels of darkness are there to deceive Ann. Angels are also there in your life. They aren't visible. You don't see them or hear them, but yet they are there. They fight in the war for the souls of every human being.