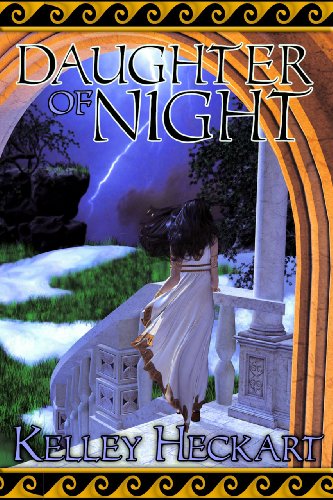 about this book: The title of this book comes from Greek mythology. The Daughters of Night were the Erinyes or the most common name--Furies (Roman term). These were the punishers of mortal wrongdoers and were very terrifying to the Greeks. Night is one of the aspects of the Great Goddess (Rhea) and in this aspect, she created the Erinyes and other frightening beings.

Deciding to make my heroine in Daughter of Night one of the Greek Erinyes was a bit challenging at first. After all, these terrifying ladies are vengeance goddesses and their only duty is to punish mortal wrongdoers—not your average women. I had to figure out a way to make a female that looks frightening and punishes people into an attractive, likable heroine. With a little magic, I was able to make that happen.

And when I say magic, I mean that Rhea, the Great Goddess, used magic to turn her vengeance goddess into a human.

That seemed like the best way to turn a vengeance goddess into a heroine, considering that the Erinyes felt no remorse while enacting justice to mortal sinners. Punishments ranged from tormenting madness to suffering a terrible disease. There is one bright spot—showing remorse can help end the torment.

In my new release, Daughter of Night, Rhea created another Daughter of Night named Becuille. This vengeance goddess had the power to punish mortals, but her main duty was to punish the other gods, the Titans, whenever they disobeyed Rhea. She also served Rhea as a personal guard and became the Great Goddess's most trusted servant. Rhea uses magic to make Becuille human and sends her to find the Titan that betrayed her and hiding in a foreign land. Even though Rhea trusts Becuille, giving a vengeance goddess human emotions and sending her out into the world might not be the best idea.