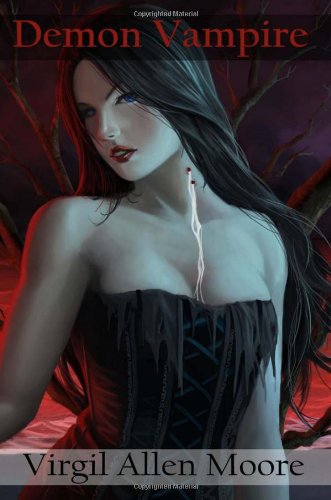 about this book: Demon Vampire is the answer to every frustrated vampire fan out there that thinks werewolves, fairies, and shape-shifters shouldn't be in a vampire novel. If you want a long satisfying read that has more complexity than the average book out there, choose Demon Vampire.

My novel is food for the Gothic Soul. Blood, Desire, and the Ultimate Temptation await the reader. (However, generally gothic women tend to read the book over gothic men.)

Demon Vampire took a year to write and contains 242,795 words.

The title "Demon Vampire" is the simplistic answer to the basis of the book. Within are vampires and Demon Vampires as the title. It serves as a unique entry into my world. Everyone always asks, "So What's a Demon Vampire?"

The cover of the book is the main character's love interest, Kyli Waterfield. On the cover, she looks about 26, in the book she is actually 16. There is an explanation for this, but you will need to read most of the book to understand it fully.

The difficulty with writing Demon Vampire was stopping. I built the characters so well that they tended to say things on their own. This added a great deal more dialogue that was planned. Rest assured, you're in for the long road on this novel.

The research for the book was odd. I had to look up the Ottoman Empire and choose when the social downfall would have been felt by it's citizens rather than when it actually fell. Little details like that made the research a bit tricky, mixing fact with impressions of the time.

I learned that I have a lot to write when it come to explaining the details of things. My descriptions have been noted regularly by reviewers, sometimes to a fault. By others, they have been lauded and cherished. Mostly Young Gothic Girls.

To my readers, I'd like to say that we all have creation within us. From the simplest character to the most imagined building in a novel. Our Dreams Create Reality. All we have to do is pursue them.

Video: A review of the book Demon Vampire by Virgil Allen Moore