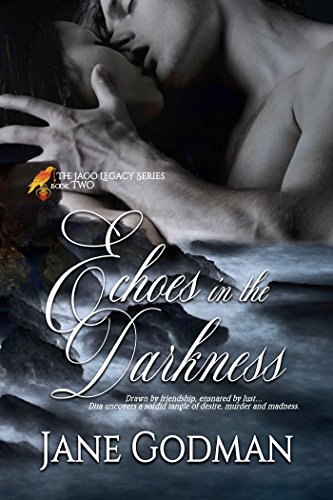 Book: Echoes in the Darkness (The Jago Legacy Series Book 2) by Jane Godman

about this book: If you like your romance with a dash of horror and you enjoy a creepily ever after ending, then chances are that, like me, you're a fan of the gothic genre.

How do you write a good gothic? Is there a formula? Well there are certainly elements that can be applied to all good gothics.

1. Atmosphere
This is the key to the gothic. Poetic, gloomy language sets the scene. The atmosphere must be lush, decadent, beautiful, yet horrifying. Contrasting light and shade are key elements. The shadows are stronger, but the light is allowed to filter through.

2. Setting
The setting is another character in a gothic. It is often a remote building, possibly of medieval origin, for example a castle, abbey or crumbling manor house.

3. The Male Protagonist
Ah, our hero. Or anti-hero, in the case of the gothics (think Rochester). He may have inherited powers or status, so he might be titled or talented. He is likely to be solitary or egocentric. His personality will be deeply flawed and he could well be obsessive. We may get a sense of duality, or even that there is a doppleganger. He may attract yet repulse our heroine, and the sensual elements he brings to the story can be overt or implied.

4. The Female Protagonist
Our heroine has grown up since the days of Jane Eyre! Traditionally, she was a trembling victim, frail, passive and naïve, who was subjected to grotesque acts by a superior will. Now, however, she is likely to be strong and feisty. She may well have many of the same characteristics as the male protagonist. And she will fight back!

5. Dark Secrets
Secrets are the lynchpin of most gothic novels. Generally, they are so dark and insurmountable that they spell doom for the main characters and make their lives unbearably difficult.

6. Death and violence
This can be explicit or implied. Often it is the threat of something horrific rather than the reality of it which gives the gothic its unique atmosphere. Think clanking chains or ghostly footsteps rather than axe-wielding serial killers.

7. Haunting
Houses, belongings, demonic possession. You name it, if it can be haunted it will be and should be at some point in gothic literature. Reincarnation is a popular theme.

9. Curiosity
We all know it kills cats and it's likely to kill our heroine too if she's not careful. Picture our heroine in her flimsy gown, nervous but determined as she enters the forbidden abandoned wing, or tiptoes down the stairs to the dungeons, climbs the ladder to the attic full of cobwebs and moth-eaten furnishings, running from the house in terror toward the clifftop… We've all seen those scenes in horror films. We've all shouted at the screen "Don't go into the attic!" and shivered with a combination of pleasure and terror when our heroine ignores us. Bless her.

10. Ignorance (is bliss)
Knowledge is power, that much is true. But Jane Eyre would not have worked well as a story if Mr Rochester had said at the outset, "There's something I need to tell you about my first wife…" (that statement applies equally well to Maxim de Winter in Rebecca and many other gothic heroes).

11. Remoteness
The castle is always on an isolated clifftop, the mansion at the end of a long, winding drive, the island inaccessible unless by the weekly cargo plane.

12. Omens and portents
Symbols and signs steer our characters—and, of course, us—along a specific path. But are we being deliberately misled?

13. Obsession
Desire, lust hatred, revenge, family. Any or all of the above may lead to an obsessive character who is ripe for a role in a gothic story.

Echoes in the Darkness is the second book in the Jago Legacy Series.

Reviews for Echoes in the Darkness:

• 'Godman has truly mastered the art of Gothic Romance. Every aspect needed to create the scene for a truly epic dark romance is within these pages; dark and deadly atmosphere, chills running up and down your spine, forbidden and dangerous love...'

• 'Echoes in the Darkness is an engaging Gothic horror romance. It gives you all the shivers and secrets of a forbidden past and wraps them up with a hot romance.'

• 'The author weaves a story of mystery and murder, of horror and romance, knitting the seperate pieces together very well. The tension and suspense is well done, one minutes your burning up as romance blossoms and the next you are left with chills down your spine at the mayhem been unravelled.'

Video 1: Echoes in the Darkness
Video 2: Legacy of Darkness