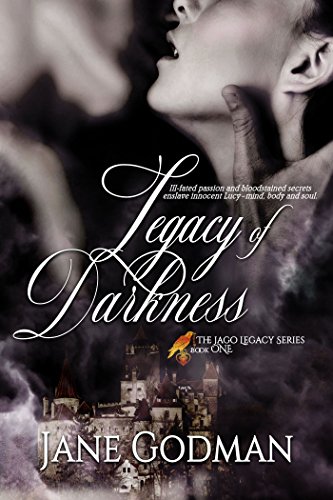 about this book: Why do I love reading and writing gothic romances... love stories with a dash of horror and a creepily ever after?

Gothic romance is a melodramatic style of writing that originated in 18th century England in the tortured imaginations of writers including Horace Walpole and Ann Radcliffe. Soaring castles, dark dungeons, ghosts, murderers, eerie secrets, kidnap, incest, rattling chains, mad monks… some, or all, of the above feature in the best examples of the genre.

Many of the plots of later gothic romances followed a similar theme to the classics such as Daphne du Maurier's Rebecca or Charlotte Bronte's Jane Eyre. A young woman who is all alone in the world goes to live in a creepy old house owned by a mysterious man with dark secrets. Once she gets there she is terrorized by a series of unexplained events, and must find the courage to solve the mystery, usually discovering that the man who appears to want to harm her is, in reality, a damaged soul whom she can save with her love.

Reading gothic romance allows us an outlet for our darkest imaginings. From the safety of our armchair, we can accompany the heroine as, clad in a clinging white nightdress, with only a single candle to light her way, she climbs the creaking stairs to discover just what those strange noises in the attic actually are.

One of the best things about a well written gothic is the atmosphere. Picture our heroine in her flimsy gown, nervous but determined as she enters the forbidden abandoned wing, or tiptoes down the stairs to the dungeons, climbs the ladder to the attic full of cobwebs and moth-eaten furnishings, running from the house in terror toward the clifftop… We've all seen those scenes in horror films. We've all shouted at the screen "Don't go into the attic!" and shivered with a combination of pleasure and terror when our heroine ignores us.

Gothic romances have been crying out for a revival. Our heroine was due an injection of feistiness. The sensuality that was hinted at by Victoria Holt, Mary Stewart, Barbara Michaels and their contemporaries needed to be made explicit.

You may feel the need to check under the bed when you've finished burning the midnight oil after reading a Jane Godman gothic romance. You have been warned...

Reviews for Legacy of Darkness:

• 'I was at times horrified, thrilled and always entertained. She pulled me in with the vivid characterization and sinister atmosphere. I also liked that the horror, mystery and romance aspects were all equally represented.'

• 'This book captured me. I couldn't put it down and finished it in a day. I don't want to give to much away, but I was not expecting the twists!'

• 'Oh, my goodness! This really was a gothic in the true tradition of the genre. Victoria Holt and Daphne du Maurier would be proud. I am still reeling from the brooding atmosphere and the dark secrets in this story.'

• 'Jane Godman has weaved a tale that is utterly delicious. It is fun, sexy, scary and yet with a nod to the classics. What a combination!'

Video 1: Legacy of Darkness
Video 2: Echoes in the Darkness