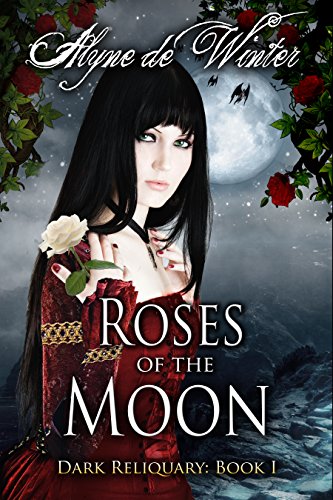 Book: Roses of the Moon (Book One of Dark Reliquary Series) by Alyne de Winter

about this book: 'Mara' is the first volume of a 4 part series called 'The Roses of the Moon'. The setting of this Gothic Faery Tale is an ancient, labyrinthine castle on a mountain in 17th century Hungary where, in the time before time began, the moon emerged from the womb of the earth. Its is a place of primal mystery where angels, gods and devils attempt to sway the passions of those who live therein.

The story is told through the eyes of Mara, the daughter of the evil Countess Orzsebet, a vehicle through whom the Bloody Countess, Ezsebet Bathory, enters the realm of the faery tale.

Mara is bombarded by many unseen forces:

"At nine years old, I was a religious child. A walking icon of the Holy Virgin, dressed in dark blue, red, silver or black, my dark hair in a long plait down my back under a crown-like jeweled and velvet parta. A large, ornate crucifix, chains of saints' medals, scapulars, and rosaries shielded me as if my young, innocent soul were on the very brink of Hell. We were Roman Catholics holding out against entrenched Orthodoxy, Protestant incursions, assaults by the Ottoman armies of Mohammed, learned heretics, and witches that charmed the trees and birds and other wild things of the forest. Castle Szeppasszony was the last bastion of God's Glorious Word teetering on the edge of doom..."

When Mara is 16, she discovers the truth about her mother's activities. The Turks are about to attack, and the devil is abroad pressing her toward a terrible sacrifice.

This book was largely inspired by elements of the Goth scene in London, and my interest in the 16th-17th centuries in Europe. I have written many stories based on fairy tales for adults, what I call Gothic Faery Tales. I am the lady who draws away the veil to see into the heart of the mystery, just as Mara does at Castle Szeppasszony.

An enormous amount of research on crux of the 16th-17th centuries in Hungary, religious and political conflicts, the magical arts, even the timing of the phases of the moon, went into this book that took 5 years to write.

I feel there is a great deal in this story to entertain readers and give them food for thought on issues of power, good and evil, and the forces that clash within us. The setting is highly imaginative and strange, and full of surprises. It draws on similar energies to Bram Stoker's Dracula and other classics of the grand old Gothic tradition, to carry the reader where the veil it thin, and the powers of darkness rise to the light.