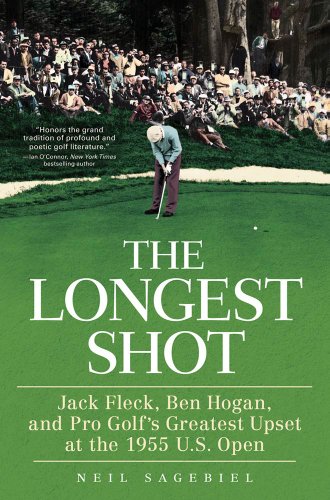 about this book: THE LONGEST SHOT is the inspirational story of how virtual unknown Jack Fleck beat four-time Open champion Ben Hogan in an 18-hole playoff to win the 1955 U.S. Open, one of the greatest upsets in the history of sports.

THE LONGEST SHOT was selected as one of the top 10 sports books of 2012 by Booklist, the well-regarded book-review magazine of the American Library Association.

How did this, my first book, come about?

It was about this time in 2007 that I picked up the phone and called Jack Fleck (now 91) at his home in Fort Smith, Arkansas. A reader of my ARMCHAIR GOLF BLOG who shared my interest in golf history and Ben Hogan passed along the tip. You might want to talk to Jack Fleck, he suggested. That sounded interesting and fun to me. Little did I know that a first phone conversation would lead to many conversations, get-togethers at Champions Tour events where I caddied for Jack and ate in player dining rooms with other golf legends, and many more experiences that I could not have anticipated.

I got to know Jack and dug into his story. He got to know me. I wasn't planning to write a book, but I realized that an incredible story still waiting to be fully told had arrived at my doorstep.

• "THE LONGEST SHOT is the first book from Neil Sagebiel, the founder and editor of Armchair Golf Blog, and he makes a strong bid to create shelf space for himself alongside 21st-century golf literati like John Feinstein, Mark Frost and Don Van Natta Jr."
— The New York Times Sunday Book Review

• "The story of unheralded Jack Fleck's triumph over the great Ben Hogan in the 1955 U.S. Open golf championship is one of sports' greatest upset stories, and Sagebiel tells it superbly, wringing every ounce of poignancy and drama out of the action."
— Booklist