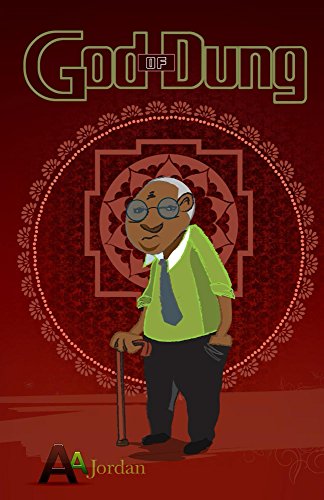 about this book: God of Dung (or GoD as I like to call it) is one big "what if" – as in, what if all the Gods of ancient mythologies were thrown together under one roof? Obviously, they would not get along. And so, the only solution they have is to enlarge the roof so that everybody has their own space. But that's easier said than done. Though the Gods are really good at creating a cosmos, they're not necessarily good carpenters. So they summon a human architect to do the job for them. There's just one problem: He's retired and he's not even sure he can do it.

This strange story was inspired by the first ten minutes of Hayao Miyazaki's masterpiece Spirited Away. Anyone who has seen this anime knows that it begins with a girl and her parents wandering into an abandoned theme park populated by spirits. The idea of humans beings lost in a world of spirits fascinated me, but I've also been interested in ancient mythology since my teen years, so I decided to write a story that combines the two. I decided to make my world a world of the Gods and my main character an old man. Perhaps, this is really a story about me wandering into this world (although at 40, I don't yet consider myself an old man).

Anime serves as inspiration for all my stories. When I write I'm usually visualizing anime characters and their world, so I hope lovers of anime will be drawn to this book. But GoD is really for anyone who has ever been fascinated with ancient mythology or has wondered about how and why human beings came up with the idea of Gods in the first place.

Like I said, I've been fascinated with that topic myself since my early teens, so I like to tell my friends and family that GoD was really 24 years in the making. Mostly, my interest was in the mystery schools of Ancient Egypt and Greece. So by the time I decided to write this story, most of the research was already there. However, embarking on this book compelled me to broaden the scope of my research beyond the Near East, so much of the two years that I devoted to writing this book were also spent learning about Gods from other parts of the world. I'm particularly drawn to Shinto.

But all the cultures and mythologies are fascinating. So much so that the hardest part of writing this story was the casting. No, seriously. The moment you decide to write a book about ALL Gods from ALL myths, you feel like it's an impossible task. It made me realize that what I really meant was not ALL Gods, but as many Gods as possible. Juggling so many Gods in one story and making sure they all had distinct voices was very difficult. If this had been a graphic novel, the Gods could distinguish themselves visually, but in a novel it is mostly their voice that will make them stand out, and so a lot of effort was invested in choosing Gods whose voice would not be confused with the others.

The result, I'd like to believe, is a story that's fun and light on its toes, but one reader said that the book "made her think." If that's true, then what's not to love about a thoughtful book with a healthy sense of humor?

I realize that new books by yet unknown authors are a gamble for the readers; however, like all gambling there's always the possibility, no matter how small, that you might win big. That's how I feel when I break away from my tried and true to discover something new. The first review I got for GoD came from a complete stranger who discovered the book on her own and said that the book was still on her mind long after she had finished reading it. I think that's the best payoff from a new book and I hope GoD can be that for new readers.