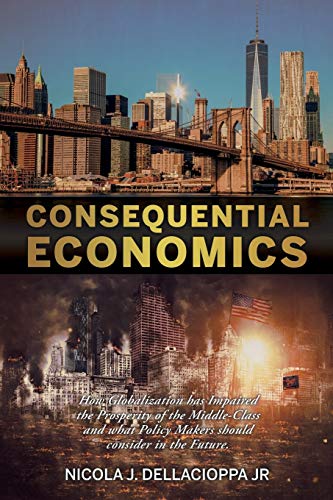 Book: Consequential Economics - How Globalization has Impaired the Prosperity of the Middle- class and what Policy Makers should consider in the Future. by Nicola Joseph DellaCioppa

about this book: Consequential Economics is primarily about Globalization and the destabilizing effects it has had on Capitalism. While the book presents a very pro-capitalist outlook, it also explains how globalization has shifted the power so greatly towards the hands of the rich and powerful, that average citizens and governments have lost significant power.

My book goes in depth into how Capitalism is supposed to work with normal business cycles whereby businesses will tend to invest locally on down turns, thus stimulating the economy and reducing governments need of being the main catalyst of the economy during down turns. However under Globalization, much of the manufacturing capability has been shifted off shores thus exacerbating down turns. In fact much of the bidding up which occurs during economic up turns is also caused by this shifting of production offshore as well. All of these conditions have caused governments around the world to build up unimaginable debt while squeezing the average citizens.

Devastation to the environment has also been greatly increased under Globalization. Environmental pacts intended to reduce Carbon emissions have actually worked oppositely under Globalization. Since these pacts exempt developing parts of the world, environmental pacts serve to only speed up the rate at which businesses shift production to low wage nations. Since these low wage nations generally don't observe environmental or worker's rights the global conditions are only worsened.

While Consequential Economics outlines numerous issues including how globalization has created the environmental crisis and weakened Unions it also presents solutions that can get the country and the world back on track.