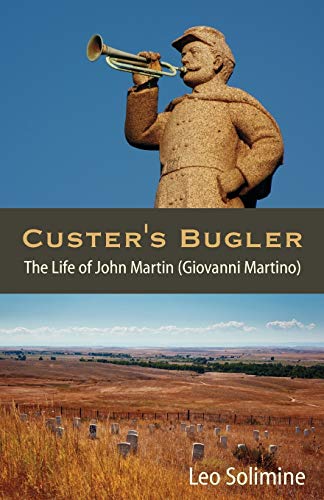 about this book: As General George Custer and over 210 troopers of U.S. Seventh Cavalry Regiment prepared to attack a massive Indian village at the Little Big Horn, a messenger was sent off bearing a final, desperate plea for help. John Martin, an Italian-born bugler who had just joined the Army, rode hard as bullets plunked the ground around him, anxiously looking for the other 3 Seventh Regiment companies, led by Captain Frederck Benteen. As he handed Custer's infamous "Big Village. Bring Pacs." dispatch to Benteen on that hot late June day in 1876, Martin never imagined that he would be the last trooper "to see custer alive." But by the age of 24, Martin had already endured a lifetime of hardship and risk: Abandonded as an infant, he was named and baptized Giovanni Martino by the kindly mayor of Sala Consilina, a small comune in southwestern Italy.

At the age of 14, he ran off to joing Giuseppe Gardibaldi in the fight for Italian Unification. As hope for a good life diminished in the hardscrabble south of Italy, he found himself headed to America a few years later and joined the Army a year later. After the Little Big Horn, he remained with the Army for another 30 years before retiring to family life in Baltimore. Within two years, however, Martin moved to New York City and became a ticket-taker on the nascent NYC Subway system where his celebrity grew each year, aided by many invitations to the stage and parades; patrons, jounalists and schoolchildren flocked to hear 'Bugler' Martin recount the events of that hot June day in 1876 when Custer met his fate ... and the history books met John Martin.

A very well researched little book that details the life of one of the Little Bighorn's forgotten heroes. It's an entertaining read, and the author is very efficient with his words, wasting little time on personal opinions and focusing on the extensive research. The book starts off with Martin being left at an orphanage, and proceeds through his life in Italy - including his time with Guiseppe Garibaldi - before taking a boat to America. It follows along in great detail as Martin joins the US Army and serves as Custer's bugler at the Little Bighorn battle, and continues on into Martin's post-Army life as a minor celebrity (and subway worker). This would be a good book for anyone interested in history, especially students, and for Italian-Americans of all ages. Good book...I enjoyed it! [by Lew]