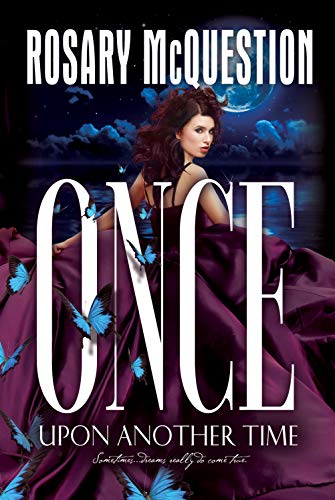 Book: Once Upon Another Time by Rosary McQuestion

about this book: I was inspired to write ONCE UPON ANOTHER TIME because there's something about the paranormal that intrigues me, like why some people experience it and others don't. It's a mystery no one can clearly define, you're either a non-believer or a staunch supporter of the supernatural. There's really no in between

I've always been intrigued with the spirit world – spooky unexplained sounds during the middle of the night, the world from beyond trying to claw its way through to our world. Or a chill that rattles the spine when one senses that something unnatural is near. However, most consuming in my life has always been the question of what becomes of us after we die.

I was six years of age when my uncle, who I was extremely close to, was killed in tragic accident, and later my mother died when I was very young. At the risk of sounding like a kook, I can honestly say both had visited me shortly after their deaths, which in itself is a remarkable story. There are certain events in my life, such as the above mentioned, that played an intrinsic role in wanting to write ONCE UPON ANOTHER TIME. Perhaps it's my way of saying I don't believe we just fall into some deep black hole and disappear when we die. I strongly believe we cross over to another dimension, and that sometimes the world of the dead and the world of the living collide.

My debut novel ONCE UPON ANOTHER TIME is a story of a young woman's journey to overcome the guilt she feels over her husband's tragic death, which leads to a second chance at finding love, although, in a most unusual way.

The main character, Aubrey McCory, suddenly acquires the psychic ability to be able to communicate with the dead. Similar to Sylvia Browne, only thing is that Aubrey can only connect with one ghost—her deceased husband, Matt. I'd envisioned the story to be lighthearted and humorous, and thought it would be fun to have Aubrey's psychic ability spill over into hearing the thoughts of the living, which by the reviews on Amazon, people seem to have found quite amusing. The characters are colorful, like Laura, Aubrey's best friend, a former debutant with a hefty trust fund who has a way of always choosing the wrong men.

Aubrey's connection with Matt's ghost becomes the catalyst for helping her work through the guilt of his death. There's also a romantic aspect to the story when Aubrey meets the next love of her life. This is where the story takes a bit of a twist. The strong attraction they feel for one another has overtones of something paranormal bringing them together. There is a fine thread of mystery woven into the story that plays around with the afterlife and quantum physics that in the end might leave you wondering if that stranger you met who seems so familiar was just a case of déjà vu, or if you once upon another time might have actually met.

The Five Star reviews on Amazon, thus far, have been remarkable, and I'm extremely pleased, to say the least. The first three chapters of the book can be previewed on Amazon at http://goo.gl/e9Qo5 Bios of some of the characters are on the Amazon page, while all character bios can be found on my website at www.rosarymcquestion.com

Rosary McQuestion was born in Brooklyn, New York, grew up in Wisconsin, and currently lives in Michigan with her husband and their three
cats. Following a long career in advertising and marketing, which included owning her own agency as well as having served as director of marketing and creative services for a well-known party goods manufacturer, she now indulges in her love of writing. Rose likes spending time with friends and family, listening to classical music, and on lazy summer days, enjoys fishing and the outdoors, and reading a good book.

Video: Once Upon Another Time by Rosary McQuestion