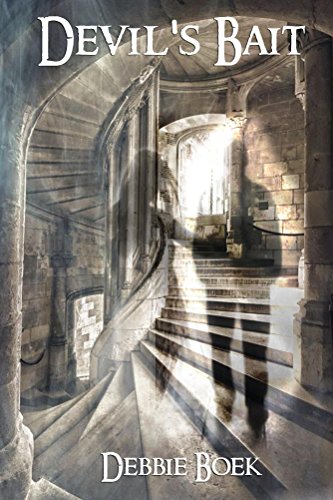 about this book: Devil's Bait is a ghost story with a romantic twist. I originally intended it to focus on how the paranormal affects animals. This story is about the Draper family that move into an old house with their pets, dogs, cats and horses. The animals are more attuned to the entities residing in the house than the family is, at least initially.

But the story took a different path and became more about Emma Draper. She comes to the realization that, not only is her house haunted and her children in danger, but her husband is being unfaithful.

She enlists the aid of two brothers to help her rid her home of the ghosts and demons and, while doing so, develops a romantic relationship with one of them. That situation makes Emma's struggles to overcome the malevolent entities in her home even more complicated. Will she stay with her new love or will she put her children's happiness above her own?

This book was originally self-published in July 2017. I had a lot of fun writing it and did quite a bit of research about black magic, demonology, ridding ghosts from your home, and pretty much anything creepy that might enhance the story. Ghost stories have always been my favorite and so I really enjoyed trying my hand at it.

I was pleasantly surprised to find that people who normally don't read any type of horror or scary books did enjoy this one. I believe that is because the story is a combination of suspense and drama, with some scary moments scattered along the way.

Most people that have read it said they couldn't put it down because they needed to see what was going to happen next. That, above anything else, makes me happy, because they got involved enough with the characters and the story to want to keep going until it was done.

Here are some quotes from the reviews it has received:

• "This was the first supernatural book that I have read, I usually go for the romance books. This book did not disappoint."

• "Devil's Bait by Debbie Boek is a well written thriller that will take you on a wild ride."

• "I found Devil's Bait grabbed me as soon as I began reading, so much so that I slept through my alarm the following morning after staying up reading into the early hours."

The ending may not be what everyone wanted it to be, however, the sequel will be out shortly which should take care of that issue.

Devil's Bait is for anyone who wants a fun escape for a little while. Someone who likes a little spookiness and excitement, and a character that faces adversity and grows because of it.

My plan is to write a series of books with these characters and, in each one they take on another paranormal creature as they continue to explore their own personal issues. I'd love to get more feedback and take my readers along on this journey with me.