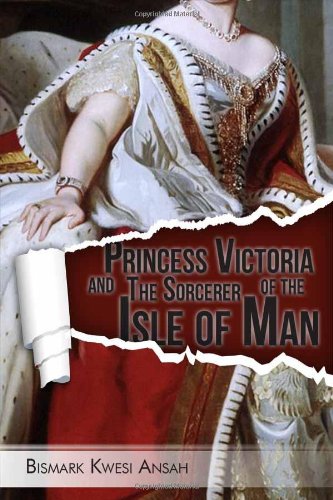 Book: Princess Victoria and The Sorcerer of the Isle of Man by Bismark Ansah

about this book: This book is about Andrew, a young knight who killed his step-father, inherited his powers, declared himself leader of the Isle of Man and opposed the Queen of England. He blamed an attack on him by loyalist soldiers of his step-father on the queen and placed a naval blockade on England. As thousands die as a result of hunger and lack of medicine, an attack by creatures of Andrew saw one of the queen's daughters named Victoria, leaving England to join Andrew.

I developed the interest in writing when I read a book titled, "Oddesey" but what inspired me the most was J.K . Rolling's Harry Porter series. This book is primarily for teenagers between the ages of fifteen to nineteen who want to broaden their literature and descriptive stories and adults who love adventure, comedy and love to picture what they read.

It took me one month and two weeks to write this story. I was able to do it because of the enthusiasm and seeing myself as a character.

It was extremely difficult looking for a title for this story and even sent the manuscript to the publishers without a title. Looking at the strong character of Victoria and Andrew who became a bad sorcerer of an island that became famous through his step-father, I narrowed the title around Victoria, Andrew and the Isle of Man.

I chose this cover to because the dress truly depicts true royalty and perfectly fits the character of Princess Victoria.

The hardest part of writing this book is Princess Victoria's escape through the forest and the military intervention by England to re-take the Isle of Man.

This book would not have been possible without the power of the internet. Living in Ghana in West Africa and with my story set in the 1600 to 1700, I had to do a lot of research on cloths, military equipment, castles and all the description I was going to use for the story since I was born in the 1980s and have no idea of what 1600 and 1700 looked.

This book has taught me just one lesson and that is, as humans, even in the face of clear defeat from an enemy that is robust, there is always a way to defeat that enemy.

To those about to buy and read this first book from an African author who is not known but able to write this masterpiece, this is a must read book which will blow your mind. Do you want to know Princess Victoria's real motive for joining forces with Andrew? If you want to see yourself as a character in this story and have a vivid description of the events that happened then quickly grab your copy and read to find out.