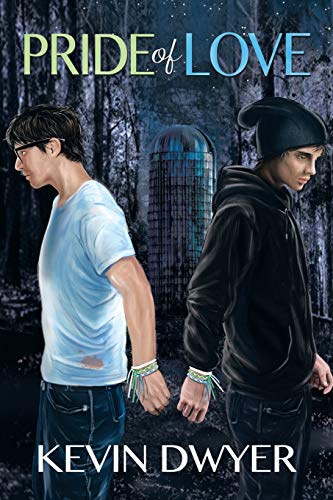 about this book: After Jesse Coleman (25yrs old) was attacked in Chicago. Dwelled in pain and hopelessness, Jesse takes off a three colored bracelet that he wore his whole life. He requested to move to his mother Claire. Finding out that it was a hate crime because he is gay, his mother thinks about his request. Lack of evidence quickly led to the decision to move. Starting new in Winconsin, Jesse meets Jaden Mitchell (25yrs old) that lives across the street. Even though they dressed differently, the two feel for each other. What hides inside them are evil acts that were brought onto them that leaves them with scars.

I liked the cover. The reason is they're reaching for each other. Feels like there past are slowly pulling them apart. Silo and the woods match up with the characters I came up with.

Pride of Love got me in stuck sections for quite a while. It's hard to filled in between the beginning, middle and ending. The story has alot of support for these characters, especially the mothers for each male.

The story can be read by anyone. I kept out profanity and sex scenes. Their are kissing with same sex, just because I had too prove these two characters liked each other. I am trying to reached the open minded readers, or the hard headed readers.

Pride of Love tells a story about a 25 yrs old gay male that was beaten because of his life style. Down the road he meets another 25yrs old gay male that is different from him. But the two went through a same horrific event. Just too show they're not alone in these situations.