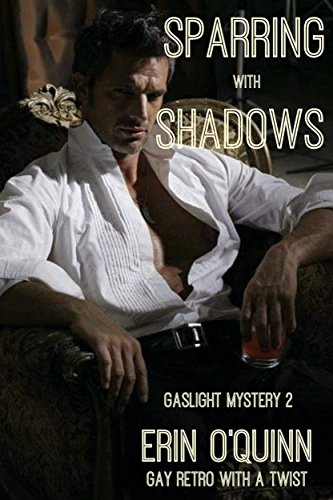 about this book: Tag Line: Two men are sparring with shadows too dangerous to ignore . . . and too private to talk about.

A fastidious, surly investigator of private affairs, and a randy roustabout intent on bedding him: Two men confront their deepest needs and their greatest adversary.

In SPARRING WITH SHADOWS, Simon Hart fights his own shadowy persona, the homosexual man he has refused to acknowledge in himself . . .  Michael McCree contends with the love-hate attitude of Simon and with a covert agency making demands on his life . . . and both men spar with the shadow of the Brown Man, an elusive criminal who has escaped capture and has chosen Simon as the target of a deadly perversion.

Already, two reviews of SPARRING WITH SHADOWS have been lavish in their praise:

• "5 Stars!...It is the delicious, slow awakening of passion in one man and a tempering of lust in the other that drives the emotional landscape of this story...The author has an uncommon ability to channel what is in both men's inner space..."
— Diane Nelson, Sand In My Shoes Reviews