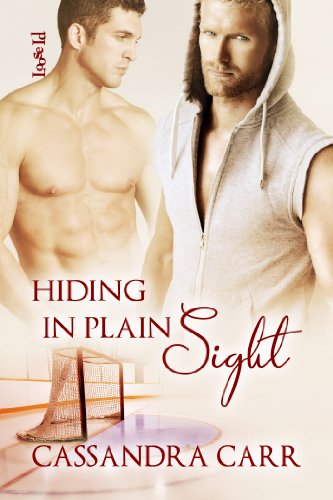 about this book: Hiding In Plain Sight is a book about a man named Vladimir, a hockey player who struggles to come to terms with his sexuality in an environment not always known for tolerance: professional sports. To make things worse, he's Russian, and has been taught homosexuality is a sin. But then he meets Joey, an ex-Army Ranger, who's also gay and helps him to see there's nothing wrong with this lifestyle.

As the two learn more about each other, Vlad finds himself falling for Joey, and wonders if it's worth it to risk his career and possibly even his safety to declare that love the world. Both men are very physical and that comes out in their sex life. I liked that aspect of the book as well- the showing of first lust and then developing love as the story goes on. This book, at heart, is not a sweet romance. Both men are in their 20's and virile and the story doesn't shy away from that. Not to say the plot revolves around sex, because it certainly doesn't, but sex does play an important role in Vlad's journey to becoming comfortable with who he is.

The book tackles two main topics that are on the forefront today; homophobia in professional sports and treatment of homosexuals in Russia. I wanted to bring these issues to light, as both need to change. I was inspired to write the book with the plot I chose specifically because of the news about homosexuals being beaten and murdered in record numbers in Russia. I did a ton of research both before and during the writing of this book, and the treatment of LGBT people in Russia broke my heart.

Because of its content, a professional hockey player and his decision about whether or not to come out of the closet, Hiding In Plain Sight seemed like an obvious title.

Here's what one review site, Mrs Condit & Friends had to say about Hiding In Plain Sight: When it's all said and done, this is a love story about two guys who find each other, despite the consequences, and continue to thrive even though they are a part of a sport that normally does not allow much lenience for homosexuality. Will love prevail, despite what they face?