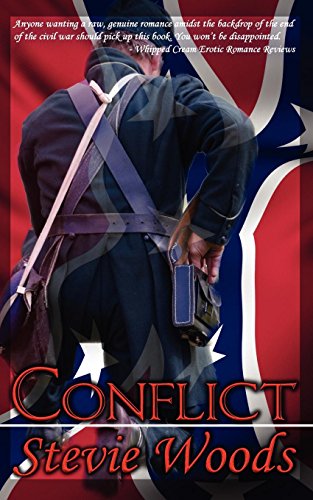 about this book: I wanted to continue the story I began in CANE – as did my readers who demanded to know when the sequel was coming out! – showing what happened to the three main characters whose lives we followed in the first story. And yes, you read that correctly, three characters. No, it's not ménage, far from it, but these three men's lives crossed in a way that neither could ever forget. And though they now find themselves on opposite sides in a brutal war each tries to be true to themselves and the man he loves.

• Review from Fallen Angels: "Stevie Woods doesn't just deliver a fantastic love story in Conflict. The passion, not just relationship-wise, but also the passion about what is right and wrong leads these three characters throughout this story."

• Review from Whipped Cream: "The author has delivered a well-written and vivid book with complex characters set in the backdrop of a brutal war. The honest emotions and engrossing storyline had me unable to put this book down once I started reading it."