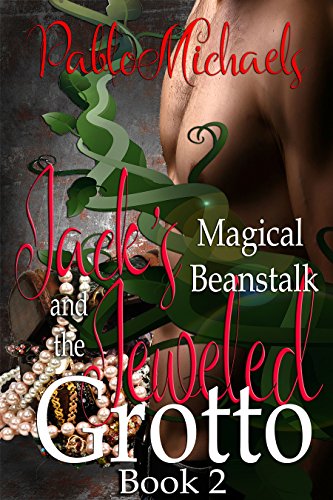 about this book: In this gay romantic sequel to the adult fairy tale book, Jack and the Magical Beanstalk, Jack and Sam have been living happily together on Jack's prosperous farm with Jack's widowed mother, Lorene, and the two farmhands, Zeke and Adam. When Sam started having nightmares concerning his father's health, Sam became distraught and felt helpless not being able to go back to the land he was born, even though Jack attempted to find a way to climb back up to Sam's native land. When Sam traded five prized bean seeds and a golden egg to the peculiar old man wearing only a red bikini underwear for five magic beans, he agreed to make their trade a secret and was unable to tell Jack. But Adam was aware Sam was dealing with the peculiar old man and blackmailed Sam into having sex to keep his secret. When Sam climbed the new magical beanstalk to help his ailing father, he was unaware there were two new villainous giants, Duchess Luscious Lips Loretta and Queen Buxom Bosom Belinda inhabiting the castle. Jack was left behind to save the farm after a late spring blizzard killed the crop of beans without any more prized seeds left to plant. Did Sam save his ailing father and brothers? Should Jack figure out a way to save the farm from ruin or follow Sam? Would Jack be in time to save Sam from the wrath of the giants? Jack had an idea for the jewels the giants coveted. But what was the secret of the jeweled grotto where Jack and Sam first made love?